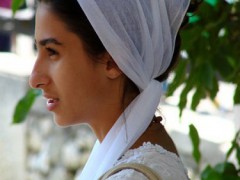 42% of Romanian women live in severe poverty. This is the worrying conclusion of a 2013 European Union Report on Gender Equality. I wanted to find out more on how women in my country got there, so I spoke to Prof. Oana Băluță, associate professor at the Faculty of Journalism of the University of Bucharest. She’s an acknowledged authority on gender and public policies and has published several books on gender equality so she seemed exactly the right kind of person to turn to to get an understanding of why such a huge number of Romanian women are in such a calamitous situation.

I knew that the majority of women live in the countryside where they are more exposed to adverse conditions. So wouldn’t a move to the big cities with the much greater opportunities they offer give women the chance to improve their lives I asked Prof. Băluță. Is this really the case? Is gender equality better in cities?

She told me that in terms of university graduates women outstrip men – only such achievement is neither reflected on the job market, nor in women’s salary structures. And she mentioned another European Report on Gender Equality which shows that in Romania the wage differential between men and women jumped to 12.1% in 2011 from 8.8% in 2010 and 7.4% in 2009. The fact that women make less money than men shows the much slighter value attached to their educational  background, she explained.  And this, of course, is frustrating.

Another downside of being a woman in Romania has to do with the issue of bringing up children which, she pointed out, employers frown on as a unnecessary inconvenience.  And she drew my attention to the fact that in Romania one third of women with children do not participate in the workforce while an ever higher percentage of women are raising children in single-parent families. This gives you the full picture of the real costs a woman has to pay for the lack of balance between education, field of work and renumeration. When it comes to social exclusion, she tells me, the risk in Romania is extremely high, and in the ratings we score second place after Bulgaria, with 40% for men and 41% for women.

Prof. Băluţă also reminded me of the sad reality of the many women who work in the fields of education and health. Normally, such key sectors for the development of any society should benefit from satisfactory salary structures. But once more this is not the case in Romania, she argues, where education and health are two of the most undervalued of all employment sectors with salaries that rarely exceed 500 euro a month.  Perhaps a high school teacher with over twenty years work experience might jump that bar but for the rest the outlook is gloomy. And this is another reason, she says, which places Romania on the bottom rung of the European ladder when it comes to gender equality  –  as the European Institute for Gender Equality has demonstrated. Sweden, by contrast, is at the very top as the country that pays most attention to equality between men and women in terms of salaries, education, health and influence.

At the beginning I wrote that a move to the bright lights and greater opportunities of the big cities might give women more chances to improve their lives. But this is not necessarily a solution that will change the fact that women, in Romania too, suffer discrimination no matter where they live. And I speak of the kind of discrimination that ultimately makes a woman live under worse  conditions than her male counterparts.

So what can be done to improve the situation? Gender equality as part of the curriculum in the education system? Legal provisions in the workplace that clearly indicate women and men have equal rights? Government policies to harmonize the professional and personal dimensions of a woman’s life? Prof. Băluţă suggests all of the above. But I would add one more thing, maybe just as important: women’s solidarity and support for themselves and their cause.