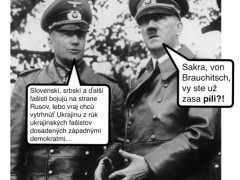 Caught between the West of NATO and the EU and trouble brewing east of our border, Slovakia and the Slovak people have to do a delicate balancing act between their ideals, commitments and their economic impacts. Even it causes unrest amidst some ‘fringe elements’ of Slovak society.

The only comprehensive opinion poll on the subject, organized by the Institute for Public Affairs was published [SK] at the end of June 2014 and showed some interesting results. According to it the majority of Slovaks think that Ukraine has the right to decide its future independently, Russia has no right to interfere there and that Slovakia should help Ukraine on its difficult road to prosperity and democracy. Of course, some things should be taken with a pinch of salt. Declaring an allegiance to ideals is one thing, it is another thing when said ideals interfere with the balance book. If helping Ukraine would influence our welfare or if switching to another energy source would raise public, a “yes but” would inevitably nuance all of the above strong positions.

The Slovak prime minister, Robert Fico knows this very well. And he has a very delicate balancing act to do. When abroad he keeps voting for final western sanctions against Russia. But in his typical effort to stay the most popular Slovak politician, he is ready to criticize them as counterproductive when back home.

In fact he has gone on the record in saying that the whole Ukraine situation is just a “standard geopolitical duel between USA and Russia”[SK].

And Fico is not the sole Central-European offender. In fact his stance is not very different to the opinion of the Czech president (and Fico’s friend) Zeman, who named the Ukrainian crisis a “flu”.

Generally speaking Slovaks sometimes stereotype Ukrainians as either day-labourers or mafia members. Since the gas crisis in 2009 they also know them as non-payers. For Slovakia the crisis was a warning which forced us to increase gas reserves and build pipe connections from other countries than just Ukraine. But those countries also get big portion of their gas from Russia so Slovakia is very much dependent on Russian gas anyway.

Despite his initial cautious stances, this year Prime Minister Fico proudly opened the gas pipe from Slovakia to Ukraine which could satisfy up to 20 percent of Ukraine’s natural gas demand. The gas could be imported from Norway [SK].

But of course it is not all an issue of gas revenues. There are ethnical and ethical dimension at hand as well. Some Slovaks are ready to support Ukrainian integrity because of the perceived danger of similar Hungarian independence claims in Slovakia. Many do it just out of moral principle or because of their own memories of the Moscow-led occupation of Czechoslovakia.

There are also Slovaks who openly support the Russian attitude.

One of them (without any proof often accused of being on the Russian payroll and after his failure in the 2014 presidential elections called “Agent 0.6%”) is former anti-communist dissident and short-lived Slovak ex-prime-minister Čarnogurský, now the opponent of “imperialistic American politics from Washington” [RU].

The pro-Russian opinion block has rather strangely attracted the support of shaved head gentlemen with a penchant for overextending the right hand and a dislike of Semitic races. These groups are attracted by Putin’s authoritative way of ruling and for them he is none other than the savior of ‘civilization’ against western multiculturalism and decadency. Particularly strange seeing as the common narrative within pro-rebel circles is that Ukrainians are ‘fascists’.

Even if the majority of those who support the East Ukrainian rebels does little more than to speak, there are news estimating tens of Slovaks fighting at the rebel’s side. There is no information about direct 1:1 relations to extreme groups in Slovakia however. One of the Slovak fighters narrates in a web video [SK] how, influenced by Russian internet stories about the Ukrainian killing of the small children, he decided go to “stop fascists and divide the republic”. What surprised him was the fact that pro-Novorussian fighters he knows are mostly foreigners, not locals. “Where are they, why are they waiting at home? When they meet us they’re asking when the war will end. Well, when we will not sit at home and watch TV … (when) we will take a gun and go to fight.”

“Slovak, Serbian and other fascists are fighting at Russian side because they want to snatch Ukraine away from hands of fascists installed by western democrats…”

It is hard to say how it will really end. From Slovakia the East Ukrainian conflict looks far and vague, its actors distant and fuzzy. The present problems of the Slovak government (but also the Austrian business lobby) don’t focus on the war brewing on its eastern border but instead include plans on extending Russian broad gauge from the Slovak-Ukrainian border deeper into central Europe. For it Donetsk or Luhansk are not as important as catching the next gravy train.