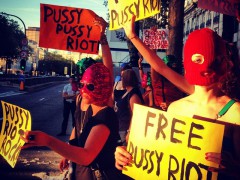 At the end of 2010 both the Washington Post and the Economist created a new buzz word for describing the political situation in Hungary: “Putinization”. So how can Russia escape from its own “Putinization?”

Russia has never been a big supporter of democratic freedoms, prefering to draw on its imperial past and on the idea that the country pursues its own path in history. Russia is a democratic state according to its constitution, but it is ruled by an authoritarian leader, which in my view turns the country into an authoritarian democracy. Putin’s famous “stability” course relied on high oil prices and the support of the popular majority. The economic recession proved that both “stability” and the support of the population are off the table. At the same time, the gap between rich Moscow and the poor periphery is widening. Total governmental control over public media and a vast disinformation campaign only enhance the general lack of democratic rights and freedoms.

The Russian parliament has reached a productivity pinnacle this summer passing various crucial pieces of legislation in record time. MPs did not consider any opinion from outside stakeholders or experts and this is not surprising. Why? Because these laws were fast tracked expressly to limit the freedom of NGOs, protesters, internet activists, journalists and liberals.

Most of these adopted laws are in direct contradiction with the constitution and even with other laws. The Law on Demonstrations seeks to impose substantial penalties on protesters. Dmitry Medvedev repealed a Libel Law while he was still president; right now this law is back – this time with much stricter penalties and fines. Many journalists and bloggers fear that the new Criminal Libel Law will substantially limit freedom of expression, put an end to any kind of investigative journalism and enhance self-censorship.

The brain drain increases every year as more and more educated people prefer to leave the country and the repressive regime of Mr. Putin. Most of my friends are either already living abroad or planning to leave Russia at some point. Young and talented Russians feel more appreciated abroad despite all the hardships they face in getting a work or residence permit in Europe or the USA. The mass protests in Bolotnaya Square last winter encouraged a lot of young intellectuals in their belief that a gradual transition to democracy was possible. Yet it was not too long before the courts pressed charges against the protesters, forcing many of them to flee the country and seek asylum elsewhere.

During this year’s mass protests most of my friends living abroad wanted to be in Moscow to express their support. Failing that, they organized various protests in Budapest, London and many other European cities against Putin and his regime. This new awakening of civil society in Russia is able to destabilize the foundations underpining Russia’s “Putinization” as the inflexible regime is no longer able to react fast enough to the changing environment and changing demands.

Pussyriot Action in Brussels by maitea6 on Flickr (CC BY-NC-SA 2.0)

The trial of the singers from the punk band Pussy Riot has torn the country apart. Three young women were arrested after their “scandalous” performance in the Cathedral of Christ the Savior last February.  This case is no longer religious but rather political in nature and will definitely redefine the value of freedom of speech and expression. Last Friday the court sentenced them to two years imprisonment for “hooliganism on the grounds of religious hatred.” As a result, no one is a winner: the girls will go to prison, while Vladimir Putin has now to deal with a vocal and growing civil society.

The ruthless behavior of the authorities has already forced people to extremes, such as emigration or “siding with the devil” as when nationalists and liberals found themselves on the same side during the major protests that took place last winter in Moscow. Even though the state tries to tighten the screws, civil society in Russia keeps on growing. To give only one example, last year an apparently benign civil society action – self-organized volunteers using the Internet to coordinate aid delivery and services in the severely flooded region of Krymsk – triggered the government to adopt restrictive laws for volunteerism (which is seemingly more effective than the state itself in public service delivery).

The crisis of legitimacy in Russia is difficult to ignore.  Corruption, kickbacks, low levels of accountability and religious bigotry can blend to form a potent Molotov cocktail that will set civil society ablaze.