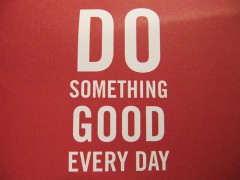 Do something good every day. Photo by Howard Lake on Flickr under CC license (CC BY-SA 2.0)

Despite the stable growth of the Russian economy, social inequality in the country remains very high. Experts predict that Russia’s GDP will increase by 1.8 percent this year but such economic stability doesn’t translate into improvements of the welfare state nor does it guarantee any social sustainability.

As a journalist I have to cover terrible stories of corruption, lawlessness, and lack of security in Russia on a daily basis. Sadly, these stories are so commonplace, they no longer sound surprising. Sometimes I feel that there is no positive news coming out of Russia – that the country is slowly falling into an abyss of darkness with fewer and fewer scientific innovations, a chronic brain drain and a general climate of hypocrisy.

Even so, it is still possible to find some inspiring and positive news. It is obvious that poverty is one of the major impediments to the development of any country. How do you breach the divide between the ‘haves’ and ‘have-nots’? I guess you need to connect them and show these two social groups how they can help each other.

Many people have more than they need. Overconsumption clutters our attics and flats. Do we really need all these clothes, shoes, new smartphones and flat screen TVs? What do you normally do with your old stuff? Most of the people I know simply throw away things they don’t need when in fact the poor could benefit from them.

People in remote towns and villages, orphans and the elderly are the most vulnerable members of society, living on or below the poverty line. In a situation when an indifferent government fails to fulfill its own functions, civil society has to step in and start helping people take care of each other. Many volunteers across Russia have taken action to organize and help those in poverty. This unprecedented trend is a new phenomenon that was unimaginable even a decade ago in Russia.

The backyard view of an orphanage for deaf children by Mikhail Koninin on Flickr, under CC license

Spasibo!, which means “thank you” in Russian, is the first chain of charity shops across the country that collects clothing donations. It redistributes them among other charitable organizations and also manages to sell 10% of the donated clothes to the public. This way, Spasibo! has collected up to 30,000 USD over the last few years.

Former photojournalist Mitya Aleshkovsky represents the avant-garde of volunteer initiatives across the country. He has created a social initiative called Need Help [ru] as a platform to showcase ordinary citizens who brave all the red tape to do extraordinary things in support of their own communities.  He believes [ru] that if the government doesn’t support people in need, society has to be proactive and step in to fill the government’s place.

Mitya and his team cover stories about people who help young Russians who leave orphanages. Legally every orphan has a right to receive accommodation yet in reality many young people get stuck between a rock and a hard place: they either have no place to live or they fall easy victims to real estate scams. Orphans are not well aware of their rights and are given little preparation for life outside their foster homes. They need legal help and moral support from society. Mitya and his team encourage people to volunteer, provide legal assistance, and donate money and time. The project works towards real solutions for current pressing problems.

These and similar initiatives have sprung up across the country like the first buds of springtime. While it may seem that Russian officials have completely lost touch with the realities of its country’s social issues, thankfully ordinary Russians themselves have begun to rely on each other’s direct help. When the state is failing, such initiatives step in to sustain the social fabric of a country and, hopefully, in the long run, pave the way to sustainable growth. When discussing sustainability, we must focus not only on environmental aspects, but also on social ones. After all, sustainability is as much social, as it is environmental and economic.