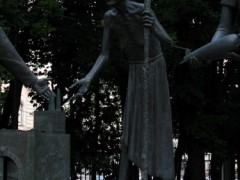 “The average salary in Russia is based on the premise that one person earns RUB 2 million while the other 99 earn RUB 8000 per month. So taken together they earn RUB 27,000 on average. Simply put, Petya has 10 apples and Vasya has no apples. So on the average, they have 5 apples each. Or Russian officials eat meat, while I eat cabbage, so on average we eat stuffed cabbage.”

This internet joke is very much to the point. In Russia, the benefits of economic growth haven’t been distributed evenly among members of society. Over 18 million Russians have to survive on USD 199 per month, most of them urban dwellers. While poverty doesn’t discriminate against gender – at least not according to official statistics – it is obvious that women from underprivileged backgrounds are much more vulnerable to various types of abuse.

It can happen to anyone

Impoverished and vulnerable women are at risk of being trafficked and forced into prostitution. The great demand for Slavic women and girls in brothels all across Western Europe means that trafficking and human slavery have become increasingly widespread in Russia.

Imagine a girl from a remote township in Russia – and there are many like her –  who simply wants a better life. A girl who knows little about the internet and the scams that force many women into prostitution. In her wide-eyed pursuit of a dancing career or a nanny job, she decides to apply for a job in Spain or Italy, advertised alluringly in a local newspaper or online. And the next thing she knows, she is sold off on the black market somewhere in Istanbul.

Modern day pimps and criminals are skilled in constructing websites with all the trappings of legitimacy. However, if you start digging around, the gilt peels off and the shady reputation of the company advertised soon becomes apparent.  In one of only many recent scandals, British police arrested several Russian pimps who used their website to traffick women to the UK.

Recent research by the Moscow State University for the Humanities claims that people with low income, part-time employment and limited socioeconomic resources tend not to use the internet. So it’s not surprising that poor women simply don’t know how to verify and doublecheck the information they read when applying for that wonderfully sounding respectable job somewhere on the sunny island of  Malta.

That is why educational programs for poor women in remote places in Russia should be promoted as a matter of urgency, programs that inform women about viable alternatives such as microfinance initiatives to help them start up a new business or acquire the skills they need to earn money online.

Even though the rich earn 16 times more than the poor, the international community doesn’t see Russia as a poor country. Common misconceptions of Russian oligarch wealth and Vladimir Putin’s kick-ass approach to the West only reinforce the image of a strong country with a growing middle-class. The reality on the ground is quite different: poor women everywhere in Russia are in desperate need of educational initiatives to help them build a better future for their families and avoid the snares of human trafficking. Yet international NGOs in Russia normally focus on global issues of censorship and the lack of human rights while ignoring the evils of widespread poverty.

Kiva is a microfinance organization that helps entrepreneurs all over the world to start their own businesses. People can lend and borrow money for their projects. Kiva has helped poor women in Bangladesh, India, South America, but there are no registered projects in Russia. Poor Russian women are unaware of such initiatives either because they don’t speak any English or because they don’t really believe that they can succeed.

Many Russians find it difficult to get a loan and start their own business as they lack basic financial knowledge and have little faith in their success. Oxfam is one of the very few international NGOs to organize training and mentoring sessions for young people to make their business ideas come true. In 2008, around 4000 people opened their own businesses after completing Oxfam’s Youth Business Russia program. The program doesn’t target women in particular and there aren’t any specific data on the number of women who attend them, yet the initiative certainly plays its part in helping women escape the vicious poverty cycle.

Poverty affects both men and women, yet impoverished women, much more than men, can turn into easy targets for human trafficking. There is no official data on prostitution and no one can say for sure how many women disappear and never return home. Yet an FBI report for 2006 revealed that a staggering 8000 women from the Slavic republics of the former USSR were working in Russian mafia organized prostitutions rings on US territory alone. This is why it is so important to raise awareness about such issues and educate women to use simple verification and protection mechanisms before that glowing job offer abroad traps them in the hell of modern day slavery.