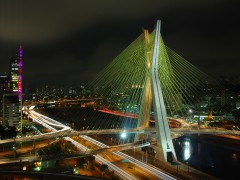 I set my feet on the São Paulo supernova. It’s a grey morning and streams of people are walking to the nearest subway station. I go with the flow, street after street, into the station and the crowded train. All around me is the usual hum of a working morning: people discussing the weather, yesterday’s telenovela, some yawning and of course the bleeps of the omnipresent ringtones from people’s smartphones. But there’s something different here. A young, professional-looking man behind me has – could it be a French accent?

As I arrive in the business district at Berrini Avenue where a thicket of high-tech buildings houses  a cluster of consultancies, law firms and international institutions, the moving stream divides as people wend their way to their separate offices. But who is that crowd in the corner, wearing skirts and shirts I would rather expect to see in London or Tokyo? A second glace tells me that these are actual young foreigners engaged in what appears to be a breakfast networking session.

When I first moved to São Paulo from New York, I joked that I might have moved to a tropical country but was still keeping a dollop of cosmopolitanism. São Paulo is famous in Brazil for having hosted a number of immigrant populations from Eastern Europe to Japan and the Middle East. However, such migratory movements were mostly confined to the mid-twentieth century, and the cultural heritage they passed on to subsequent generations was rather limited in scope.

Now as a young professional in the Brazilian business capital, I am witnessing a new migration pattern. As I’ve discussed before, these qualified foreigners are coming – and reshaping the identity of São Paulo, rekindling the flame of the city’s edginess. In this, they are joined by a growing number of young Brazilians who’ve had the opportunity to study or work abroad and who understand the potential of cross-cultural awareness.

I am talking about seeing small cup cake shops sprouting up, transplants from Greenwich Village to São Paulo’s increasingly gentrified neighborhoods, and often run by dedicated cosmopolitan entrepreneurs. Or about a friend who, after living in Buenos Aires for too long, decided to start her very own puertas cerradas restaurant, challenging Brazilians’ traditional cultural wariness of things foreign.

No other city in Brazil represents the mash-up of globalization as well as São Paulo.  And given its role as a financial and business hub for the region, and the the concentrated wealth of the emerging Brazilian middle class, nothing seems more natural than this hybrid identity. Which is why I have come to see São Paulo as a sort of urban, global supernova, chaotic and enthralling at once.  Nor am I alone in witnessing the rediscovery of the city so long overshadowed by the sheer solar beauty of Rio.

Yet, São Paulo is not looking to its beachside sister-city for aesthetic inspiration. Actually, it isn’t looking anywhere. It is the city’s young denizens, natural or adopted, from all the great cities in the world who are now looking to São Paulo.