Rural areas in South America harbor the most endemic forms of poverty. During the last decade, economic growth, combined with improved connectivity and targeted social policies have increased income and reduced poverty.  But now further improvements will be harder to achieve. 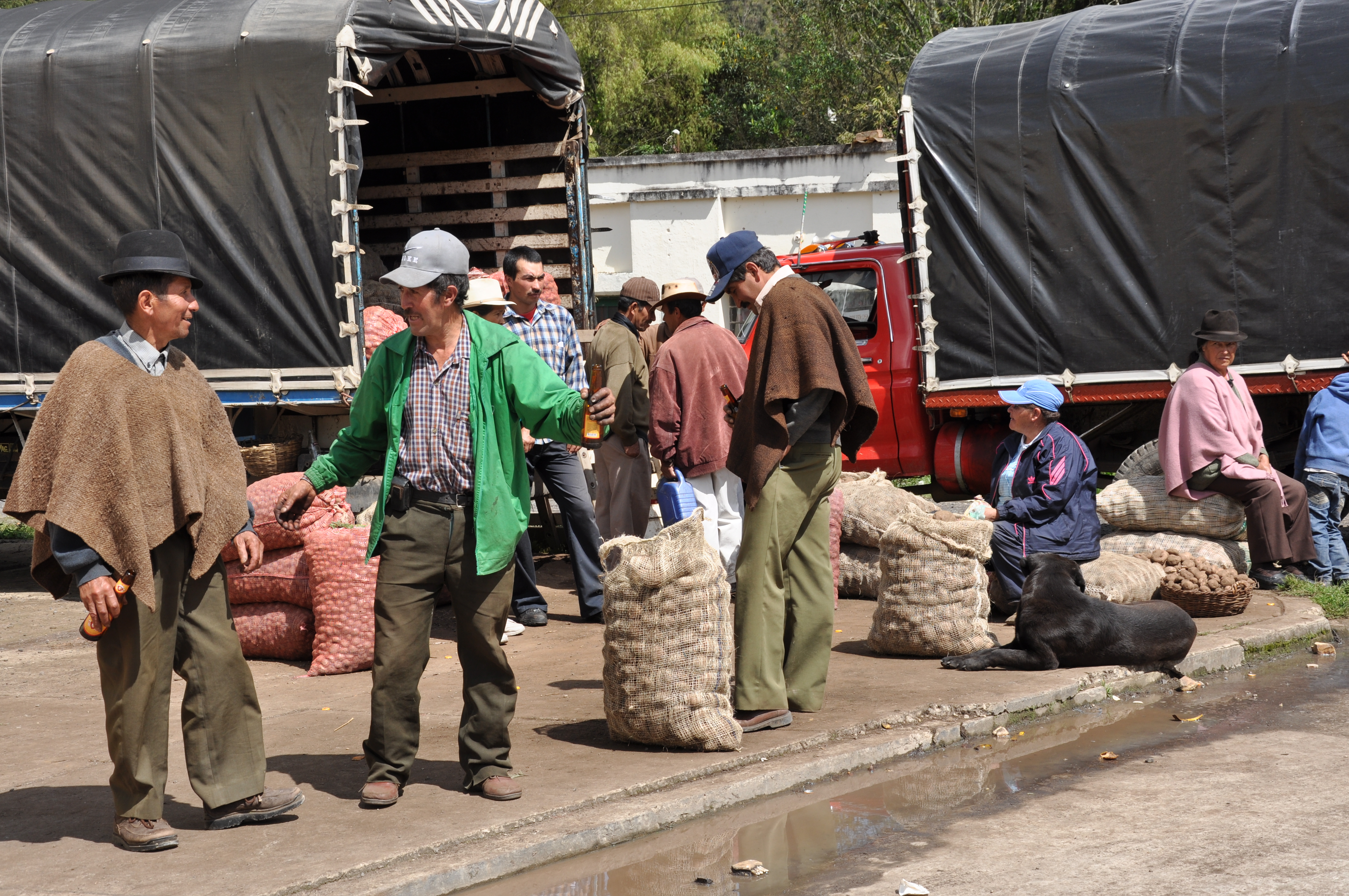 Farmers preparing to sell potatoes in Colombia. (by momentcaptured1 via flickr.com CC by 2.0)

Under peace negotiations mediated by the Cuban and Norwegian governments, the Revolutionary Armed Forces of Colombia (FARC) and the Colombian government, signed the first out of five agreements in June 2013 “towards a new Colombian rural sector: integral rural reform”.[1] Although these agreements will be implemented only after Colombians approve them in referendum, both parties coincided that having achieved a consensus on rural development issues gives incentives to complete the peace process.

The terms of the agreement, comprehensive and ambitious, set the agenda for a broader discussion for rural development: how to increase the well-being of small producers, guarantee fair access and distribution of land, eliminate rural poverty, and stimulate agrarian production. Even in the worst-case scenario of not reaching an agreement in the next four issues, or losing the referendum, land reform will remain as a sensitive topic —and according to a broad sector of public opinion, not tackling this issue was a key driver of the FARC insurgence. While the peace negotiation process continues, Colombia is increasing public investment in order to provide financing, technical advice and infrastructure to integrate rural areas to markets, taking advantage of urban economic growth and trade agreements.

A similar debate about rural development is taking place in Peru, and a recent publication has gained traction among policy-makers.[2] According to R. Webb’s book, the introduction of market reforms in the 1990s marked two periods in rural sector development. For most of its Republican history, connectivity[3] in rural areas in Peru has been deficient due to a combination of geographical factors and weak linkages with local and regional markets. After 1990, investment in roads, irrigation, communication technologies, and energy, have caused a “rural takeoff” that is increasing income and reducing poverty in rural areas.[4]

The author’s starting point is the correlation between productivity and the size of towns. This suggests that there is an agglomeration effect where distance and geography play a role (figure 1). In the context of Peru’s rugged territory, an agglomeration effect means that there are potential productivity gains through economies of scales and investment, particularly for the rural sector. The hypothesis is that income from productive activities excluding direct transfers to households from social programs —a proxy for productivity— has grown as a result of better connectivity in the territory. Private investment and entrepreneurial activities have multiplied as a consequence, reinforcing this virtuous cycle.

Preliminary data from the 2012 agrarian census, released in December, supports this hypothesis. Compared to the previous agrarian census (1994), there is evidence of more agrarian units and non-farming activities. Moreover, the results from the census will likely confirm that agrarian units with linkages to regional and international markets have diversified income, increased productivity, and are attracting private investment.

Some corollaries for future public policies emerges from Webb’s argument: invest in connectivity and rural inhabitants will find their way out of poverty; connect rural communities to local and regional markets and local businesses will explode; and potential gains in productivity from farming and non-farming activities in rural areas will drive the next wave of investment. Therefore, the rural sector will be better off as it integrates with the market economy. Nevertheless, as the author indicates, we should take one-cause explanations with a pinch of salt.[5]

This model has worked well, although under conditions that are not equally present in rural areas nor are they replicable in the short term. Rural development policies based on this model will continue increasing household’s income in rural areas in the next ten years —as long as Peru is able to achieve sustained economic growth and bettering connectivity, which promotes local businesses. However, the stated cascade effect will not reach the most vulnerable populations. It could even have counterproductive effects. At this point, policy makers should be able to offer alternatives by creatively combining a broad set of interventions from years of applying different rural development paradigms. Recognizing the limitations of the connectivity model, particularly now that they are becoming mainstream among policy-makers, will help to create more effective rural development policies in the future.

First, the diversity of families in rural areas requires thinking beyond a one-size-fits-all approach, like the one described in Webb’s book. Table 1 shows differences between regions that could make a fair access to markets difficult: farming units in the Andes face a language barrier; lower education levels in the Andes and the Amazon imply lower expected salaries in labor markets or from non-farming activities; and faming units in the Coast, which are less poor, get more surplus for markets, while the ones in other regions consume their own production, signaling poor linkages to markets. Help is scarce too. Less than two percent of families have received technical assistance.

Second, a recent estimation  of economic growth and poverty elasticity across regions, indicates that the impact of economic growth at reducing poverty is highly uneven across regions —consistently higher in urban areas, and it has been expanding faster compared to rural areas during the 2000s. This elasticity is even lower in rural Sierra and rural Amazon, indicating huge gaps in the distribution of private and public goods in rural families, such as capital for investment or natural resources respectively. Therefore, it is unlikely that rural areas could experience a surge similar to what urban areas went through just economic growth and better access to markets.

Third, pro-market policies in rural areas may have unintended effects. There is evidence that these policies may exacerbate inequalities in the rural sector,  They may disrupt traditional institutional arrangements, introducing a different set of incentives that can put households in a worse-off situation. Other negative effects could be migration to urban areas, concentration of land ownership, depletion of natural resources, and more exposition to economic shocks.

Rural areas in Peru are experiencing a surge, and connectivity is playing a role at linking markets and rural entrepreneurs. Colombia has a historical opportunity to end a 50 year old armed conflict with the FARC and implement an agenda for rural development to generate sustainable livelihoods. Both countries need to focus on preparing rural families to take advantage of gaining access to markets and protect themselves from a new set of potential shocks. As elegant and promising as Webb’s hypothesis is, it only tells a part of the story of future rural development.

[1] The other issues under negotiation are: political participation of former guerrilla; drug trafficking; de-mobilization; and compensation to victims. Both parties will negotiate an agreement in each issue and then Colombians will approve via referendum. [Note of editor] This article is an updated version in June to include this event, which we consider a strong signal of a broader debate about rural areas development.

[3] Connectivity has a broad meaning: it refers to better roads or information technology infrastructure, but also to different measures that have reduced physical and virtual distance from the populations to labor and goods markets.

[4] Webb has estimated that income per person rose at an annual average of 7.2 percent in real terms, compared to 2.8 percent in urban areas.

[5] According to the author’s estimations, there is no other variable that explains the magnitude of the surge of rural areas in recent years. Not even public investment: with a focus on rural roads and productive infrastructure, it has amplified the effect of connectivity as an explanatory variable.