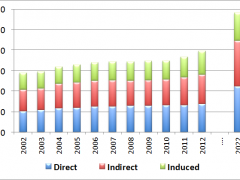 This article was originally drafted by Pasko Kisic and the FORO Nacional Internacional as part of the Rockefeller Foundation’s Searchlight Process. For more Searchlight content on futurechallenges.org, please click here.

It has become usual for South American countries to hold international global audience events. This is not only because a burgeoning middle class and continued economic growth make this region an attractive marketplace, but also because countries have been aggressively promoting themselves, mobilizing private investment in order to become tourist hubs. Through public investment in infrastructure, even small countries are now competing with Brazil and Argentina at organizing macro-events and attracting tourists, entrepreneurs and companies.

FIGURE 1. Total contribution of travel and tourism to Latin America (2011 US$ billion)

There are several examples of this trend. Since 2009, Argentina, Chile and Peru have hosted the Dakar rally, a well-known racing competition. Brazil will host the FIFA’s Soccer World Cup in 2014 and the Rio’s World Olympics in 2016. Peru has also become a hub for global meetings, such as the South American-Arab countries CEO summit (ASPA), the World Economic Forum (WEF) and the Asia Pacific Economic Cooperation (APEC) summit, just naming a few.

The World Travel and Tourism Council (WTTC) has released a study showing the socioeconomic impact of tourism in the Latin American region and projections until 2022. Figure 1 shows that direct contribution of travel and tourism (T&T) in 2011 was US$133 billion and will reach US$224 billion in 2022. The impact goes beyond these figures: in addition to expenses on T&T services (direct); companies pay taxes and invest (indirect); and more jobs increase households’ demand (induced). Taking all these effects into account, total tourism contribution will reach US$600 billion in 2022 or one tenth of total GDP of the region. In terms of jobs, this sector will employ 8.7 percent of total labor in 2022 compared with 7.7 in 2011.

The stakes are high and governments have seen the opportunity to promote tourism when supporting the private sector to organize such macro-events. Nevertheless, the promises of large revenues and short-term jobs tend to raise expectations and governments could turn a blind eye to social costs (externalities) that these activities generate. When journalists inform about potential negative impacts, their opinions are downplayed for not focusing on economic benefits. Short-term benefits are now the focus, but citizens will demand to have a say, more regulations or evaluating the long-term impacts in the future.

The Dakar Rally, which encompasses Argentina, Chile and Peru, has received direct support from these governments. While projections vary, the Peruvian National Chamber of Tourism estimates that direct tourism revenues will grow to US$400 million in the 2013 Dakar Rally. Moreover, hotels have been near full-capacity in the areas where the race developed. However, there were some negative impacts to take into consideration. UNESCO warned about the potential damage to archeological sites that are close to the race route, but there is little data about the actual impact and there will probably be no follow-up in such remote areas. A racer in the Dakar Rally (By Chile_Satelital via flickr.com CC BY-ND 2.0)

The preparation of the 2014 FIFA Soccer World Cup in Brazil shows how implementing an urban plan has triggered social and economic conflicts —but such measures are key to improve citizens’  livelihoods. The Brazilian government is investing US$15 billion, mainly concentrated in infrastructure such as stadiums, airports, and public transportation systems: the benefits could be close to US$90 billion in the next 10 years.

This mega-urban project all over Brazil has been plagued with several difficulties. First, as FIFA’s secretary general has criticized, there are delays in projects aimed at increasing hosting capacity given the potential tourist flows. Second, there are serious doubts over the development and sustainability of new infrastructure, such as the case of the Manaus stadium: this 42,000 people stadium in the middle of the Amazon region may have little use after the 2014 Soccer World Cup. Third, corruption issues, forced urban reallocations, and interventions to “pacify” favelas (shanty towns) have increased doubts about Brazil’s ability to finish all the works in time and stay on budget.

In the next ten years, the number of tourists visiting Latin American countries will double, promoting direct and indirect investment, revenues, and jobs. Supporting macro-events is important, but governments should do more to expand these benefits to people that depend on the tourism sector —mostly encompassing a myriad of small business, retailers, and low-qualified service sector workers.

Cities need to use available instruments more creatively. For example, in order to mitigate the impact over the environment, the Dakar organizers purchased carbon credits under the REDD mechanism to support two reforestation projects in the Madre de Dios region. The Lima Art Fest 2013 has recuperated a historical site to use it as a venue for different events, and private companies are targeting several “casonas” (old houses) in downtown Lima to apply this model.

Inviting tourists to Latin America should ensure them access to all the services they require, but this is just a first step. Governments, particularly at the local level, should create the conditions to mitigate the negative impacts of such activities; but more importantly, they need to implement measures that generate linkages to other economic sectors, particularly the service sector. When citizens perceive the benefits of such macro-events, they are more likely to grant a “social license”.