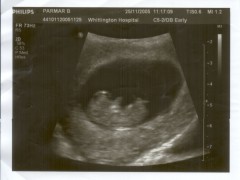 Ultrasound Scan: Determining the sex of a baby can also determine its fate; Photo by salimfadhley on Flickr (CC licensed)

There is an old folk song from Uttar Pradesh, India, which beseeches God to protect the supplicant from a monumental injustice. The mournful tune goes, “O, God, I beg of you, I touch your feet time and again/Next birth don’t give me a daughter, give me hell instead.” Faced with the costs of marriage and dowries for a supposedly non-contributing family member, many parents see daughters as burdens. Recent advancements in sex-determination testing have provided such parents with the necessary technology to remove such burdens, and in 2011, only 917 girls for every 1000 boys were born in India. Thus there are 40 million missing women in India.

In response to the growing crisis, in 1994 India passed the Prenatal Diagnostic Techniques Act (PDNT) which prohibits sex-determination. It restricts the use of prenatal tests to diagnose genetic conditions in foetuses and outright bans using them for sex determination, and requires the mandatory registration of genetic counselling centres, clinics, and hospitals. The act also holds women liable to imprisonment or fines if caught using a sex-determination test, even as it acknowledges that a pregnant woman may be compelled by her husband or in-laws to use a pre-natal diagnostic technique. Those working in the clinic or advertising its services can receive up to three years jail time or harsh fines.

Despite its strict criminalisation and severe penalties, poor enforcement has rendered the law ineffective. Studies estimate that between 250,000 and 500,000 female foetuses are selectively aborted each year. Today, there are about 25,000 ultrasound machines in India, of which only 15,000 have been registered. Doctors give the results of sex-determination tests orally, so that there is no paper trail. The lobbying power of the medical community also grants doctors a great degree of immunity. The first conviction for sex-selective abortions was handed down in 2006, more than ten years after the law had passed; to date, only 300 doctors have been prosecuted for violating the PNDT, and only a handful of those have been actually convicted.

Limiting technology will not work as long as sex-selective abortions amount to economic and social sense. There are considerable economic disincentives for having a daughter, chiefly because of the practice of dowry in northern India.  Since dowry demands increase with the economic well-being of a family, even middle and upper class families are often forced into large debts as dowry payments can be up to US$125,000. Ultrasound clinics have capitalised on this situation, and often advertise their services by advising parents “to spend Rs. 500 now rather than Rs. 5000 later”. In a survey taken in Punjab, the state with the worst sex ratios in India, nearly 80% of respondents listed dowry as the number one reason they aborted a female foetus.

Penalising doctors is problematic because it interferes with their acting in the best interests of their patients. A study found that 64% of abortion service providers were against sex-selective abortions, but viewed it as a necessity since the women they helped would face abuse at home if they gave birth to a daughter. They also believed that they were saving an unwanted daughter from emotional and mental trauma. One of the doctors in the study said that a woman “came to me saying she wanted to know if her fifth child was going to be a girl or boy. I persuaded her to have the child anyway. It was a girl and she died in 6-8 months as they did not feed her well.” The law has also failed to provide women with a safe space; by holding women liable, it has placed them in a double bind. If a woman requests an abortion, she is subject to imprisonment, but if she does not, she may be subject to abuse from her family. Infringing further upon a woman’s autonomy is not the right solution.

Restricting ultrasound technology cannot change the long-standing cultural attitudes that have made sex-selective abortions acceptable in India. Sex-selective abortions will only decrease with the diminishment of daughter devaluation. To do this, the government must focus on enhancing the position of women in Indian society. Creating economic opportunities for women, so that they are able to contribute financially to their households, is one way to weaken the belief that females are liabilities. The government can also provide parents with financial incentives to have daughters, thereby reducing the burden of dowries. For any campaign against sex-selective abortion to be successful, it must address the root of the issue. Fighting the spread of technology, and half-heartedly at that, fails to consider why the problem exists in the first place.

Sarah Mahmood is a member of Global21, a student network of international affairs magazines and a partner of FutureChallenges. A longer version of this article was first published in The Oxonian Globalist.