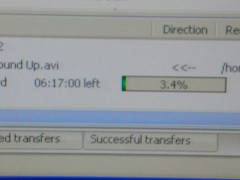 Download in Progress: Is banning the illegal use of copyrighted material impinging on the human right to freedom of speech? CC by Mike Davis via Flickr.

SOPA and PIPA shake up the battle of free information

On January 18th, 2012, websites Wikipedia and Reddit shut down in protest against a new copyright protection bill that was then under consideration by the United States Congress. The Stop Online Piracy Act (SOPA) and the PROTECT IP Act (PIPA) were the latest government efforts at curbing the sharing of copyrighted material online. The issue pits the usual contenders of traditional media companies, who see strict regulation as the only way to prevent the destruction of their industry, against online content providers and free speech advocates.

The protests were sufficient to derail the legislative process. On the day of the blackout, six Republican supporters of PIPA had withdrawn their support. By the end of January 19th, the legislative coalition behind SOPA and PIPA had collapsed and the bills were shelved indefinitely.

Despite the widespread opposition, however, it remains likely that similar legislation will still be considered. In his response to the petition against SOPA, President Barack Obama stated that while he would not support legislation that would lead to censorship of the Internet or damage innovation, he would encourage legislation that “provides prosecutors and rights holders new legal tools to combat online piracy originating beyond US borders”. President Obama’s statement captures a central issue in governmental struggles against internet piracy. In order to be successful, legislation must address not only domestic but also international sources of copyrighted material.

However, the prospect of ordering Internet Service Providers to block offending websites attracts criticism from internet freedom groups, who have accused governments of promoting censorship. Sir Tim Berners-Lee, inventor of the World Wide Web, argued that SOPA and PIPA had “not been put together to respect human rights as is appropriate in a democratic country”.

One potential successor to the failed bills is the Anti-Counterfeiting Trade Agreement (ACTA), a plurilateral trade agreement that has been under negotiation since 2007. The objective of ACTA is to standardise domestic anti-piracy legislation across much of the industrialised world, despite having no domestic force. In effect, ACTA is only a threat to internet freedom after individual signatories have passed enabling legislation.

In addition to the aforementioned blackout, a petition organised by Google gathered over 7 million signatures, and the online protests were accompanied by real-world demonstrations, indicating the growing salience of internet-related issues in real-world politics. On February 3rd, the Polish Prime Minister Donald Tusk announced that his country’s ratification of ACTA would be suspended pending further consultations. This reversal came after days of street protests in late January and a protest in Parliament on the 26th in which opposition politicians donned the Guy Fawkes masks made infamous by Anonymous, the “hactivist” group also known for their Denial of Service attacks against government websites.

There are two key lessons to be drawn from recent clashes over anti-piracy legislation. First, all future legislation will concentrate on preventing the supply of copyright-infringing material as well as prosecuting those who consume it. Second, that the architects and proponents of stricter online regulation have already lost the public relations battle. The vociferous response to SOPA and PIPA indicates that digital natives will fight on the world stage.

Adam Clement is a member of Global21, a student network of international affairs magazines and a partner of FutureChallenges. A longer version of this article was first published in The Oxonian Globalist.