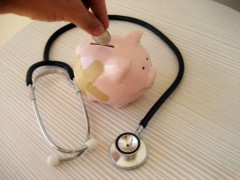 Australians’ out-of-pocket healthcare expenses are the fifth highest in the world and amount to twice the sum paid by those in the United Kingdom and France.

Almost two decades ago, the Australian government established Medicare, a publicly funded universal health care system, to provide Australians with equitable and affordable medical care, regardless of their financial means. However, the healthcare system’s claim to fairness and equity is being increasingly challenged by the current prohibitive cost of obtaining medical services, particularly for those of us who are from socio-economically disadvantaged backgrounds or suffer from chronic illness, such as diabetes and heart disease.

Many Australians continue to encounter significant financial barriers to accessing medical services. In fact, according to a recent report, more than ten percent of patients elect to forego recommended diagnostic testing or treatment due to the excessive costs of these procedures. What is particularly alarming is that amongst Australians with below average incomes, this figure rises to almost twenty percent.

This trend continues to exist despite the operation of the Medicare Safety Net, a financial assistance scheme that was introduced to assist patients to meet high medical expenses. Under this system, pensioners and low-income earners must outlay $610 in out-of-pocket expenses, and higher earners $1221, before qualifying for the government’s Safety Net subsidy, which covers the majority of subsequent out-of-pocket costs.

Although intended to assist the socio-economically disadvantaged segments of society, this system has paradoxically contributed to the creation of a two-tiered healthcare system, in which high income earners derive disproportionately greater benefits than the less well off. The top socio-economic quintile receives 55 percent of Safety Net benefits, whereas the bottom quintile receives less than four percent. This is particularly concerning, given that low-income earners generally suffer from higher rates of morbidity, in particular cardiovascular disease, obesity, diabetes and acute respiratory conditions, and are therefore more likely to require long-term general and specialist medical care. The projected increase in the prevalence of these chronic conditions only serves to make this issue more pressing and poses new challenges for the way in which equitable access to healthcare in Australia can be achieved.

A significant shortcoming of the Safety Net system is that its current formulation places too great an emphasis on yearly income as the sole targeting mechanism and concomitantly fails to adequately recognise the particular healthcare needs of individuals. A more responsive Safety Net mechanism would be able to target those who are likely to experience financial difficulties in meeting their healthcare needs.

To facilitate this targeted subsidisation program, a multi-tiered Safety Net threshold system could be established, where individuals are classified through consideration of their income levels in combination with their likely long-term medical needs. In this way, the financially disadvantaged who have high medical costs would receive the highest subsidies. In order to render this new system fiscally viable, it must also be run more efficiently, with, for example, subsidies for discretionary services being limited in favour of necessary medical procedures.

However, addressing the current inequalities in access to affordable healthcare requires not only the subsidisation of medical services at the primary care and specialist levels, but also the provision of low-cost pharmaceutical products. Reports indicate that almost one quarter of all patients postpone or avoid filling prescriptions because they cannot afford to purchase them. This observation suggests that a further opportunity to redress healthcare inequality lies in increasing the provision of more affordable alternatives, such as generic drugs.

Australia has one of the lowest user rates of generic pharmaceuticals in the world, with these products accounting for only one third of all prescriptions dispensed. This compares to rates of 84 percent in the United States, 67 percent in the United Kingdom and 64 percent in Canada. One of the main reasons for Australia’s suboptimal uptake of generic pharmaceuticals appears to lie in the entrenched prescription habits of physicians, who continue to discuss and prescribe medications by brand name.

The low domestic generic prescription rate of 14 percent, which compares to 75 percent in the United States and 83 percent in the United Kingdom, could explain in part why so many patients fail to take advantage of more affordable pharmaceutical products. Given the widespread practice of patient deference to “doctor’s orders,” the current practitioner prescribing habits that favour brand-name pharmaceuticals need to be curtailed, and medical professionals must be encouraged to increase patient awareness of the availability of suitable generics.

Currently, however, the government relies upon patients to make such enquiries. Generic substitution represents a viable avenue of improving access to affordable treatment options, and efforts therefore need to be made by the medical profession to facilitate greater knowledge and positive perceptions among patients of generic substitution.

With the projected rise in chronic illness, particularly among socio-economically disadvantaged groups, a significant future challenge for healthcare management in Australia will be to facilitate equitable access to primary and specialist healthcare as well as pharmaceutical products. A more individualised and targeted subsidisation system as well as the more efficient use of existing, yet currently underutilised, pharmaceutical resources needs to be considered. In this way, the public healthcare system can become more responsive to the needs of those for whom it was originally intended to serve.