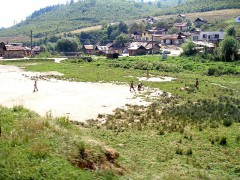 A Roma Settlement in the Region of Šariš, by Jozef Kotulič, CC 3.0

Like most of the developed world, Slovakia also faces the problem of an aging population. With ever more elderly people and fewer children, the state pension system requires the raising of the age of retirement age which, in turn, means that fewer jobs are around for young people.

Yet Slovakia has another particular problem: its Roma population. This is a group with a higher birth rate so, if trends don’t change, our future will be much more dependent on Roma children.

According to a World Bank report from July 2012, the Roma population in Slovakia amounts to 5-6% of all citizens. Because many Roma declare themselves as Slovaks or Hungarians, the official figure is under 2%, but some other sources estimate it higher than 6%. Unfortunately, on average the Slovak Roma are poor, unskilled, uneducated and unemployed. The World Bank sees their situation as critical, even when compared to that of people in sub-Saharan Africa. Roughly 20% of Roma men and 9% of Roma women are in gainful employment compared to 65% of men and 50% of women for the overall Slovak population.

Because we are part of social Europe, the Slovak Roma have not been completely abandoned. But they have become dependent on state support.

The Slovak social system is badly tuned. Unemployment benefits pay more than regular jobs in the low wage sector. In combination with racist prejudice, which Roma often encounter when looking for work, this  easily leads to a passive stance on the job market.

For politicians it was convenient and even quite cheap just to continue to promote the same old unproductive social support system.

The classic pension scheme collects money from the employed and divides it up among pensioners. This is beneficial in times when the working population is growing. Reform of the pension system allowed employees to direct part of their contributions to private funds for their future use. Consequently, these people will be less dependent on state finances, so wealthier people can feel a little more secure. But it also means that less money is available for those who do not save – such as a large part of those in the Roma community.

Once the crisis slowed and the economy recovered, state debt rose quickly making unacceptable the fact that a growing part of population is permanently unemployed. Voters have also been raising their voices against the widespread criminality generated by poor conditions in Roma slums.

In the next months we will probably see that social support will made conditional on participation in public works, sending children to school and not getting into trouble with the law.

But what must the next step be?

While the idea of making the Roma active by involving them in public works programs will most likely be useful, it still does not address the marked reluctance shown by private sector employers to hire them.

Jobs are thin on the ground for the majority population too, and even assuming that the magical transformation of Roma into low-skilled manufacturing workers is successful, they will still face stiff competition from the cheap, hard working and flexible workforces in developing countries.