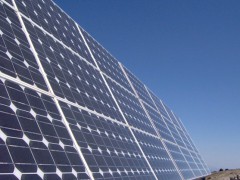 Australia receives the highest amount of solar radiation per square metre of any continent in the world. In fact, the solar radiation falling on less than 1% of the mainland’s surface area could provide for the entire country’s annual energy needs.

Yet however ubiquitous this source of renewable energy may be throughout Australia, it still remains a largely underutilised resource in electricity production. Particularly disappointing is that, as one report states, Australia obtains approximately only 1% of its electricity from solar energy, while 87% of the country’s energy needs are met by fossil fuels which are significant drivers of  greenhouse gas emissions. This current reliance on non-renewable resources is ultimately not sustainable. A shift towards renewable sources of energy production, such as solar farms, is urgently required.

One recent instance of expansion in the solar energy sector is taking place in the small country town of Nyngan in central-western New South Wales, where planning for an innovative $300 million solar plant is underway. When fully operational in 2015, this plant will supply electricity to more than 35,000 homes and will be the largest solar farm in the southern hemisphere, measuring 300 hectares, the staggering equivalent of 420 soccer fields.

However, the question must be asked about what kind of impact this large-scale plant will have on such a small town.

This project will have the effect of diversifying the region’s economy which is predominantly based on mining and agriculture. During the construction phase, over 300 new jobs and additional apprenticeships will be created at the facility, with a number of auxiliary staff also supporting the construction workforce. This is particularly significant for the region, as it may aid in mitigating the net youth migration loss that rural communities such as Nyngan are currently experiencing.

The operation will also likely deliver wider economic benefits by stimulating regional investment through increased capital expenditure. With the wages from a larger local labour force being spent on amenities such as accommodation, recreation and services, the solar plant is expected to boost the local economy’s gross regional product by 2% in its first year.

The project will also provide economic benefits that extend beyond the initial construction phase. Prior to commencement of work on the plant, local roads will be upgraded to facilitate transit of articulated and oversized vehicles to and from the site, providing for a more developed infrastructure within the Nyngan area. Once operational, the plant will also likely act as a tourist attraction, as has been the case with other solar farms, thereby generating greater national interest in the region and bringing growth to the town’s tertiary service sector.

The challenges and opportunities ahead

On the other hand, the influx of activity into the local area may prove difficult to sustain. While the local labour pool may be qualified enough to undertake less-skilled jobs within the plant, hiring locally may not satisfy the demand for professional or technical staff. Many positions may need to be externally sourced, and local unemployment levels may thus not decrease to the extent that might be anticipated at first glance. What’s more, the influx of migration to the area may place pressure on the local rental market, resulting in the inflation of rental rates. The temporary accommodation market in Nyngan is already near capacity, given the existing high demand for rental housing generated by workers from the nearby Tritton copper mine and the proposed Nyngan scandium mining project.

The possible impact of the plant upon the natural environment must also be considered. Local conservationists have expressed concerns that the plant’s construction may impact on koala feeding grounds and lead to the deterioration of topsoil and subsoil ecosystems, which host threatened and vulnerable fauna and flora.

Along similar lines, researchers at the Commonwealth Scientific and Industrial Research Organisation (CSIRO) have also suggested that the large-scale solar power installation may modify solar reflections and thereby affect the local climate and vegetation growth. However, the actual extent of these effects at the Nyngan site is currently unknown, and further impact studies need to be made. It is important that the solar arrays are engineered so as to mitigate any such negative effects, or render any climatic changes beneficial. In fact, the CSIRO is currently examining whether solar farms such as the Nyngan plant can be manipulated to produce – in addition to solar energy – significant rainfall, an extremely valuable resource to semi-arid areas such as Nyngan.

The increased development of solar energy capacity critically depends on the commercialisation of large-scale solar technologies such as the Nyngan plant. With diligent environmental regulation, the Nyngan solar farm represents a positive step towards converting Australia’s enormous renewable energy potential into tangible renewable power, an important future challenge for the country in terms of transitioning the domestic economy towards more sustainable means of energy production.