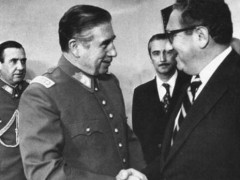 Economists and political scientists have reached this conclusion after careful empirical analysis. A recent study by Arindrajit Dube, Ethan Kaplan and Suresh Naidu, for instance, argues that corporations had prior knowledge about (and even helped plan) CIA-orchestrated coups, and then gamed the stock market using such insider information.

This was almost certainly the case in 1951, when Guatemalans elected President Jacobo Árbenz Gúzman, who cracked down on U.S. corporations’ corrupt practices in the country by nationalizing key industries and redistributing profits to the poor. The American United Fruit Company (UFC) lost tremendously from Árbenz’s economic policies.

Fortunately for UFC, the company had links with Uncle Sam – CIA director Allen Dulles himself served on UFC’s board of directors. Thanks to The Freedom of Information Act, we now know that Dulles had top-secret meetings with UFC president Thomas Cabot, in which it was decided to depose President Árbenz. In 1954, Árbenz was indeed removed from power and forced into exile.

Árbenz is not an isolated case. Other coup victims suffered from similar circumstances: Mossadegh in 1953 Iran, Lumumba in 1961 Congo, and Allende in 1973 Chile. In each of these scenarios, the CIA acted on behalf of corporate interests by coordinating coup d’états and handing power to U.S.-friendly dictators.

The results were a dramatic decline in democracy. New York University political scientist Daniel Berger recently examined the effect of Cold War CIA and KGB interventions on democracy. His finding was stark: CIA and KGB interventions both led to the same level of decline in democracy. The fact that the United States is more democratic than the Soviet Union had no impact. The research offers a humbling prognosis for foreign policy: dovish relations fare better than hawkish intrusions.

Yet neoconservatives shun the evidence. These ideological warriors, who hijacked the Bush and Obama administrations, believe that democracy should be exported abroad – even if this means war, as was the case in Iraq. White House spokesman Ari Fleischer even stated in April 2003 that the U.S. military’s purpose in Iraq was “regime change.”

Indeed modern interventions are more overt than Cold War espionage missions, yet their effect on democracy is the same: negative. The Foundation for Democratic Advancement recently gave Iraq a failing grade for its newly established political system.

Technology has of course changed substantially over the past sixty years in U.S. security operations. The CIA and Pentagon were the main consumers of the internet until the 1980s, when it became a public commodity. Before then, the American government’s monopoly on e-communications allowed it to conduct operations with relative secrecy.  Yet since the internet became public, organizations like WikiLeaks have managed to reveal government secrets, improving transparency and accountability.

The internet and other innovative technology will likely play an increasingly important role in foreign policy, as globalization causes the international community to become what is known as the “Global Village.”

Public opinion has no influence at all.

This, then, is the ultimate irony: the country exporting democracy abroad is not fully democratic itself. As one renowned philosopher said, “Take the speck out of your own eye before removing the one in your brother’s.” The U.S. should reform its own institutions before tackling other countries’. This will ultimately lead to the neoconservatives’ goal of a more peaceful and democratic world.

Cornelius Christian is a writer for the Oxonian Globalist and a member of Global21, a student network of international affairs magazines and a partner of FutureChallenges.