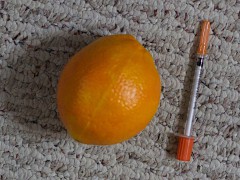 In April 2012, the Hungarian State Secretariat for Healthcare introduced a surprising new regulation to encourage diabetic people to cut down on bad habits that endanger their health. The regulation concerns people living with type 2 diabetes and controls their access to different types of insulin treatment depending on the outcomes of their medical tests.

Type 2 diabetes, also called adult-onset diabetes, is an incurable chronic disease, but its symptoms can be treated with a combined therapy of medical treatment and lifestyle changes, including exercise and dietary modifications. In more serious cases injection of insulin becomes necessary. In Hungary, two types of insulin treatment are available: human and analogue insulin treatment. Both therapies are said to be equally effective. However, there is one important difference: application of analogue insulin is easier and safer and thus ensures a higher quality of life and makes the burden of diabetes lighter than human insulin treatments do. Unfortunately, analogue insulin is twice as expensive as human insulin. In Hungary there are 1.5 million people with type 2 diabetes, half of whom are not aware of their disease. Currently 80% of patients who get insulin are treated with analogue insulin. Until recently, both therapies were fully supported by the state.

The number of identified diabetics in Hungary, 1942-2010. (The graph was compiled by the author on the basis of the page http://www.macosz.hu/a-metabolikus-szindroma-es-a-cukorbetegseg-3-resz.html)

The new Hungarian regulation uses the difference between human and analogue insulin treatments to push citizens towards a healthier lifestyle. It introduces a new system of medical check-ups on a quarterly basis and prescribes a certain limit on blood sugar levels. Those whose glucose level exceeds this limit have two choices: they either can continue taking analogue insulin with the state paying only 50% of the price or they can get human insulin with 100% state support. The former option can mean an extra financial burden of more than 35 Euro per month. Exclusion from the use of analogue insulin lasts one year, after which better medical outcomes based on the last two check-ups can re-entitle patients to 100% state support for analogue insulin. There are exceptions from the regulation: diabetics under 18, and those who have serious hypoglycemic attacks in the examination periods.

The bright side of state control

The Hungarian State Secretariat for Healthcare offers a fact-based explanation for the change. Firstl,  it emphasizes the principle that patients have to take responsibility for their own treatment. Patients who are not willing to contribute and cooperate refuse this responsibility and make state contributions inefficient and useless. The new regulation intends to increase patients’ awareness of their own healthcare situation. The state secretariat also highlights the importance of the lifestyle changes necessitated by diabetes without which insulin treatment cannot be fully effective. It claims that the increased number of obligatory check-ups will enable patients to get more detailed advice for changing their diet and exercise habits, and thus will encourage them to live healthier lives. Another important argument is that in the present economic crisis the resources of the Hungarian healthcare system are limited, while the number of patients receiving analogue insulin treatment is much higher than the European average. The approach of the state secretary is supported by the Hungarian Diabetes Association which claims that the compromise was necessary in the light of the dire financial situation.

Weak points of the new regulation

However, different experts and organizations emphasize the weak points in this concept. Diabetologists draw attention to the fact that every person is different and responds differently to diabetic treatments. Empirical experience shows that only 30% of patients are able to follow the prescribed diet and lifestyle in the long term. The reason is not always a lack of discipline: often patients simply cannot afford the financial cost of following the guidelines. Moreover, the efficiency of treatment depends not only on lifestyle, but on genetics and stress levels as well. The Hungarian Civil Liberties Union (TASZ) lists other worrying facts related to the new regulation. They find it unjust to treat all diabetics in the same way regardless of the differences that can affect the outcomes of prescribed lifestyle changes, and to assume that only a lack of discipline can lead to poor medical results. Discrimination of poor people who cannot afford to follow the prescriptions is also worrying. The most important argument of the TASZ is that the new regulation ignores bioethical requirements[1] that do not allow the use of sanctions in similar cases. The TASZ also considers the financial effects of the regulation: in the long-run, it might act like a boomerang as the health of diabetics set back to human insulin might deteriorate in the long run causing a rise in diabetes-related costs of healthcare services. This is why the TASZ has recently turned to the ombudsman, asking him to examine the new regulation and abolish it.

Following the dietary guidelines and the prescribed lifestyle is very important for diabetics. However, there are many other factors that influence the outcome of their medical tests. (Source: Cogdog, on Flickr, CC BY 2.0)

Fighting diabetes all over the world

The efficiency of analogue insulin is debatable. The standpoints adopted by different states influence state support and the application range of this drug. Nevertheless, governments generally do not decide to use the difference between analogue and human insulin to reward or punish their citizens. States use more classical methods to fight diabetes: support for research for its permanent cure, support for investigations into the main reasons and more efficient treatment for diabetes, financing long-term national prevention programs, encouraging identification of endangered, “pre-diabetic” people and establishing a supportive environment with informed and activated patients. These measures have long-term benefits for the state budget. “The economic costs from lost productivity, the healthcare costs of life-threatening complications, and the personal costs of limited fulfillment are all costs our State can ill afford to pay,” says Dr. Lawrence Harkless from Texas. Governments whose budgets are clearly insufficient to finance diabetic treatment such as India support private and public sector cooperation in the healthcare field in an effort to provide adequate treatment. Notions of personal responsibility for diabetes are spreading all over the world, especially given the present  global economic crisis and the rapidly rising number of diabetics. However, laws on diabetes are deal with the rights and not the obligations of patients. They usually do not aim to exert a similarly strict state control over the disease and patients.

Time will tell whether the Hungarian approach can be implemented efficiently both for the state and for patients. The first series of quarterly check-ups has already begun. Yet even if the regulation only partially reaches its objectives this does not mean that ethical concerns can be set aside.

[1] According to the general principles of bioethics, there are three prescribed circumstances which any regulation on the use of medicine must meet.
1. There must be a direct link between the disease and the unhealthy lifestyle.
2. Patient must be aware that their lifestyles damage their health.
3. Patient must have freely chosen their lifestyles without external pressure, and the responsibility for their lifestyle is theirs and theirs alone.
(Source: Dr. Kovács József: A modern orvosi etika alapjai – Bevezetés a bioetikába, Medicina Könyvkiadó Zrt., Budapest, 2006.)