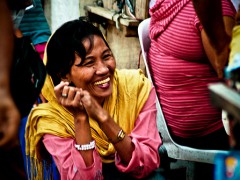 A Filipino woman in the streets of Manila. Photo by Reuel Mark Delez, in Flickr. CC BY 2.0

During my visit to the Philippines in early August, I noticed very many differences between the lives of the poor in Asia, the Caribbean and Europe. Growing up, I had always found it very difficult to understand the widely different lives people led. Of course, as you grow older you realize that various complex issues are factoring into the equation: the socio-economic class you are born in to, the place where you live, and your gender all limit and define your personal agency.

On arrival in Manila, I was able to see a different degree of agency and hear the tragic yet heroic stories of women trapped in professions they did not really enjoy, but that provided them and their extended families with a livelihood.

Although the reports of the Philippine Commission on Women show an increase in women’s employment along with a relative decrease in female unemployment, the levels of females completing elementary school and high school are still lower than those of males. Interestingly enough, however, they also show that 21.5% of women finished college, a much higher level than the 10.6% of male graduates. While the statistics show that 2.5 million women in the Philippines are government officials, corporate executives, managing proprietors, managers and supervisors (2.4 million men factor into this group), the stories of women in lower level positions, working longer hours seem to be somewhat ignored. Although in many ways, the precise circumstances in which poor women find themselves are very particular to the situation in Manila, the underlying trends of limited opportunities, disheartening challenges and unfaltering strength transcend all state boundaries. Unfortunately, such predicaments are often pushed under the carpet, not only by society in general but by the women themselves who often feel trapped in inescapable circumstances.

Like many tourists, I was stunned by the low prices for services offered in Manila, particularly manicures, pedicures and massages and was eager to take advantage of them. Over casual conversations with the employees I encountered, however, I came to realize how vastly different our lives were, even though we were close in age. As I spoke to the lady giving me a manicure, she asked me questions like where I had studied, what I had studied and what my plans for the future were. Yet when I asked her the same questions, I noticed a slight reluctance to answer on her part. Firstly, she mentioned that she was sad that she hadn’t had the opportunity to go to university, and how she would have really liked to. She showed a strong interest in what I had studied and was indeed fascinated when I mentioned that in the Netherlands, higher education is free for all citizens.

On another occasion a taxi driver told me stories of his daughter’s life at university in Manila: each time it rains the university downtown floods and classes are cancelled. Then another employee explained the difficulties she had during the rainy season. The roads of the city had been raised, she told me, to prevent them from flooding, while the houses were not and so even a slight storm, which is pretty frequent in the Philippines, would cause major flooding in the poor districts of the inner city. While the stories you hear in Curacao are not nearly as extreme, you often do hear stories of similar distressing situations – electricity outages, flooding in poorer neighbourhoods, and most importantly, reluctance on the part of governments to give poor women the social benefits that would empower them and give them more social mobility.

Although there were a vast number of similarities among women in all the cities that I’ve had the chance to explore, there was one thing in particular about poor women in Manila that struck me. In Manila, respect is not something you earn because of what you know or how old you are; respect is something you are  born with which derives from your particular socio-economic class. This, to me, was a vastly new phenomenon and one that reinforces the stratification of society.

As soon as I stepped off the plane, I noted that women three times my age would refer to me as “ma’am” and treated me with far more respect than any salesperson I had ever encountered. Very often in Manila, socio-economic class dictates the way you are treated and the fact that you can afford to buy a five-dollar newspaper means that you will be treated with more respect than the lady selling it to you. And generally speaking, this is what I witnessed. In some ways, it seemed like Filipino society has allowed women to internalize such a notion of what respect is as the norm. Yet growing up on an island that hosts various racial groups, I have always felt that respect was something you had to earn personally, and that your socio-economic background was only a factor and a minor one at that.

The various stories of women that I have heard and pieced together between my time in Curacao, the Netherlands and during my short stay in Manila have made me realize that the challenges that come with poverty are inevitable. The lack of agency and social mobility leave many of these women trapped in a life that is vastly different from their dreams. Often, I get the impression that today’s younger and more privileged generation need to hear such tragic stories to shake them back to reality, and my trip to Manila was just that: a reminder of how vastly different each of our lives is but also how some underlying realities transcend borders and affect people wherever they might be across the globe.