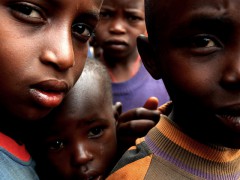 For many children in Africa these rights do not exist; there are Africa’s street children estimated at 40 million.

The problem of street children has been growing steadily in the last two decades. An estimated 10 million children in Africa live without families, mostly in cities as ‘street children’ (UNICEF, 1984:39). While the aforesaid estimates tend to be low, it must also be noted that in the last two decades or so, Africa has experienced unprecedented level of crisis ranging from such natural disasters as famine resulting from drought to ethno-religious wars, wars of attrition and the devastating impacts of HIV/AIDS. All these put together have added a quantum leap in the number of street children in Africa estimated currently to be in the range of 40 million (UNICEF 2007).

At first sight they look like regular children, but listening to their stories of rape, physical abuse, gang wars and child labour while looking into their empty and almost lifeless eyes makes it hard to believe when they say “I am ten years old”. They grow up on the streets, eating from garbage cans, begging, fighting to survive, working on the streets, selling their bodies and hustling to stay alive.

Their stories are usually very similar, but never identical. The main causes for them being on the streets are child abuse (at home or in the community), neglect, peer pressure, sensation seeking, parents that force them into child labour or begging, as well as overpopulated homes that do not have any space for them anymore.

And suddenly they find themselves on the streets, unprepared and all alone; or maybe not? They always find each other and always stick together; it’s easier to survive in a group. Many of them engage in substance or drug abuse and when you ask them why, they will tell you it relieves the pressure of living on the streets, or it helps them sleep or overcome pain, violence and hunger, others will say that they do it to stay part of the gang.

When you work and live on the streets all-day and all-night, and also take drugs you won’t have time or the state of mind to go to school. Statistics show that roughly 70% of African street children are school dropouts and 30% have never even been to school.

Many Governments are not seeing the threat that millions of uneducated children pose to national security once they grow up and even before that. These kids have seen real life and real money. On the streets of Lagos for example street kids working as window wipers in traffic make up to NGN 2,000 a day (US$ 12), which is US$ 10 more than what 70% of the population live on daily (US$ 2).

Becoming used to a relatively “high” income from a very young age means becoming used to disposable income. If the income stops flowing in, these youths are driven into the arms of armed robbery gangs where they are completely inculcated into the world of darkness and miscreants. With the growing number of street kids, the number of potential armed robbers and threats to state and national security is growing speedily.

What is Africa doing about this?

There are a few centres and homes across Africa that are funded by the Government or private NGOs. Most of them are poorly equipped and poorly funded and are run by badly trained social workers who try their best to rehabilitate the children in their centres. They get the barest education you can imagine, sprinkled with some vocational training, in the hope that they will give up life on the street for an orderly life. Education is often seen as a means of helping children in the streets – most of the street children are illiterate with no basic skills to help them get proper job. Education may help break the vicious circle of marginalization and help potential street children towards better life, but it needs to be solidified with top-notch vocational training.

Africa needs to sit up and start facing the challenge.

Miss Nkemdilim C. Uwaje BSc. Hons is a Director of Future Software Resources Nigeria Ltd.. She attained a BSc. Hons in Bioinformatics at the Ludwig Maximilian University (LMU), as well as the Technical University of Munich (TUM) Germany. She has worked on various research projects at the Max Planck Institute for Psychiatric Research in the department for Statistical Genetics and Proteomics, as well as for the Pharmaceutical Company Affectis Pharmaceuticals AG, Germany. These research projects encompass the development of software solutions for complex biological as well as chemical calculations and simulations, database design and administration as well as statistical analysis. After re-locating to Nigeria in 2005 Miss Uwaje was involved in various research projects, such as the Wazobia Linux initiative, the E-Government Interoperability Framework, NITDA Open Standards Framework, as well as the deployment of e-commerce and e-portal solutions in the Nigerian public and private sector. In early 2008 she took up her position as Managing Director of Future Software Resources Nigeria Ltd. and re-branded the company, thus changing its focus from stand-alone solutions to web based educational, enterprise and business solutions. Nkem is also a co-founder of Bake for Change, a charity baking club that is focused on empowering street children that are being catered to in 7 Lagos State run homes. Their activities span from youth empowerment, renovation projects, giving back all the way to educational initiatives. She is also a Board member of the World Summit Youth Award (WSYA) and all blog posts in this blog are on behalf of the WSYA. For more details visit www.youthaward.org