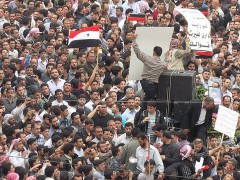 In the old days Globalization was usually by means of mounted warriors, ships or explorers who roamed continents. At first they were driven by need, afterwards they did it out of greed and to some degree, out of curiosity. Settlers, travelers on mules and camel caravans, followed the warriors.

Today we have modern military campaigns, “caravans of international corporations” and most important of all, millions of travelers on the “high-tech mule” that is the Internet. The big difference is that distances are now the length of just a few mouse clicks.

This is how an East European like me travels to Syria – via the Internet. In Romania this exotic country is usually associated mostly with tasty kebabs and with the usual stuff that you can see on TV, but there are also some specific cultural connections that can make some curios ones to get more interest on the country. Raed Arafat, a Syrian born romanian doctor, made thousands go out on the streets and protest against abuses by the Ministry of Health. So now it will be kebabs and good doctors, but Syria is definetley more.

Of course, no broadband Internet connection can match the actual experience of being there, among Syrians and also knowing the language and culture; but a blunt theoretical view can also bring us closer to a real understanding of the issue.

The Syrian Case: a Mixture of Democratic and Geopolitical Elements

What is happening now in Syria can be compared to the revolts and revolutions in the former Communist Bloc, like the failed revolution in post-war Hungary where the uprising was a result of a wider international conflict between East and West, a conflict played out on the territory of smaller countries that were “sucked into” this huge conflict.

We may have something similar in Syria today, with powers like Russia and China expressing views markedly different from those of the West on the matter. Furthermore, long lasting conflicts with neighboring countries and the uncertainties of the Arab Spring have made the situation in Syria seem even more complicated.

In terms of democratic governance, the picture is different. On the one hand, people are crying out in Syria for democracy and against the abuses of the dynastic regime, just as Libyans fought against Gaddafi or Egyptians against Mubarak. On the other, there is the long lasting experience of the Iraq campaign and the failure of American foreign policy-makers to implement any of those democratic values in whose very name they fought a terrible war. As was the case in Libya, there are also many Syrians who support the authoritarian regime. I tend to believe that they do so out of fears of the uncertainty of their own futures, reasons which are similar to those of the Israeli Prime Minister, Benjamin Netanyahu, who also seems to be reluctant to welcome the radical changes in his neighboring country.

Syria: a Litmus Test for the Definition of Democracy

From a personal point of view, it’s hard to get any sort of clear picture on last year’s events in Syria without going back to the revolutions in Eastern Europe that preceded the downfall of the Soviet Union in the late 1980s. Anikó Mészáros asked a legitimate question about Syria when she looked at the example of the Hungarian struggle for independence in the context of a wider, somehow “soft” Central European revolution: Is there anything to be learned from Central Europe?

In my own country, Romania, these movements took yet another path. The Romanian Revolution was a brutal event with over 1,000 deaths in less than 10 days. Without going into further detail, the root of the conflict can be found in a similar scenario to the one in Syria today: a great dictator whose regime brought huge dissatisfaction to the people.

At first glance, Ceaușescu was removed from power by popular pressure. But a significant part of his downfall was the loss of state institutions (from the army all the way through to the secret services), international isolation and some external interference.

My question about what is happening in Syria is: how much should it be seen as a struggle between Assad and the Syrian people and how much as the result of international pressure from the outside?

Were the Assads, Gaddafis, Ceausescus, etc., natural born bloody dictators or were they the product of contrasting international considerations like governance and ideology, natural resources and strategic importance? Is Assad’s dictatorship a radical defense mechanism against western expansionism or is he just the corrupt “landlord” of an entire country?

I think that Syria concerns everyone of us because we are all part of these international changes and if we look for positive examples in our own backyards for solving the conflict, then we should look also to our own flaws. Before stepping up to the democratic cause we should look at what democracy actually is like today. Unlike any other system, democracy has managed to evolve continuously, and we should make a clear distinction between ancient Greece, the French Revolution, the American model and today’s neo-liberalism.

22 years after the Romanian Revolution I now live in a democratic country. The people have won. But there is an ever-growing feeling among them that we have evolved into a western entrepreneurial colony with few chances of self-development, a sentiment fuelledby the huge internal danger of bankruptcy, especially after the country joined the EU.

And as a final question: Is today’s western democracy the role model for integration, just another example of greedy colonialism or a mixture of both?