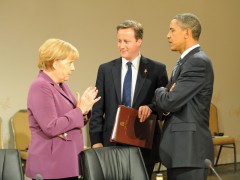 It’s now official: TAFTA/TTIP is finally on the negotiation table with the potential to become solid transatlantic reality within the next two or three years. The extremely short timeframe of this joint endeavor might sound very ambitious. Yet both the EU and the US are eager to sign this far-reaching agreement sooner rather than later to put its promise of increased wealth and welfare for more than 800 million people into action. However, intensified trade and investment between both economic giants is only one part of the story because on both sides of the ocean, political symbols of success and a new narrative are urgently needed. At present, Barack Obama runs the risk of going down in history as the president of failed promises and unfulfilled expectations, which is why he is so anxious to take TAFTA/TIPP – along with the TPP – on board as one of the key points of his lasting legacy. At the same time, the EU is beset by what is probably its biggest ever crisis of legitimacy. Unsurprisingly, therefore, Brussels needs to prove to the disillusioned people of Europe that it is not only able to deliver on economic and social progress, but can also successfully manage Europe’s foreign affairs.

Even so, the rejuvenated drive in EU-US relations this has resulted in has still taken many observers by surprise. The fixed idea was that America had lost interest in good old Europe and in the long run would ditch the troublesome continent on its ‘pivot to Asia’. But all this seems forgotten now. Suddenly, the transatlantic friendship is alive and well again, and with TAFTA/TTIP a new common project looms on the horizon. Washington started its charm offensive on Europe, and Brussels responded in kind and soon offered a date. Obama’s latest visit at the G8-meeting in Enniskillen (United Kingdom) and his back-slapping speech at the Brandenburg Gate in Berlin (Germany) delivered the right images and even proved that ‘good partners’ may pardon all for the sake of harmony and in the name of goodwill. In precise terms, this means that the criticism raised (especially about the Anglo-Saxon model of Orwellian surveillance in the form of PRISM and now: TEMPORA) with regard to TAFTA/TTIP is being marginalized or pushed aside by political decision-makers, while critical points (like the crucial question of culture raised by the – traditionally fractious – French) are adjourned for the moment to guarantee smooth negotiations.

Admittedly, the currently heated debates about the extent of US espionage in Europe have triggered some pretty strong reactions; first and foremost in Germany, where people are comparatively critical of TAFTA/TTIP. All the same, it still remains to be seen if the Europeans can really afford to risk freezing the negotiations. It’s more likely that we will see the adoption of an appeasement strategy to smooth the ruffled feathers of a temporarily outraged European public. Neither David Cameron (who has a skeleton in his own closet and is somehow closer to the US than the EU anyway) nor Angela Merkel (who wants to be reelected in September and who has surely scooped a popularity bonus from Obama’s visit) will dare to halt the speeding TAFTA/TTIP train. Leading European politicians in concert with European bureaucrats are rather united in remaining resolutely hesitant – if not altogether silent – instead of really seeking to address rising problems with one common voice. A return to the traditional narrative of a transatlantic community of shared values based on individualism, freedom and civil liberty underpins this hypocrisy-soaked process. What’s more, it’s good timing for the two partners that the old bogeyman from the glorious days of the transatlantic alliance is now having a surprise comeback: Russia is not only – rightly – criticized for its deficient human rights and media laws, but has also become a global pariah with its tough stance on Syria and the way it handles its nuclear arsenal-not to mention the Kremlin’s support for the whistleblower and ‘traitor’ Edward Snowden. Even so, the transatlantic narrative has become little more than a fairy tale in which TAFTA/TTIP supplies the reassuring ‘and they all lived happily ever after…’ ending. No real substance is left since the significant discrepancies between the stories spun (economic gains, shared values, and common enemies) and the underlying facts have slowly but surely become visible to a broader audience. This is especially the case with two central issues that – so far – have been broadly ignored by the official negotiators:

This implies that the forthcoming TAFTA/TTIP agreement and its framing in the revived transatlantic narrative will only be successful and sustainable if Europe and the US both manage to address and tackle the problematic issues of public inclusion and civil liberty. Thus what is needed as a matter of urgency is to make the negotiations more transparent and allow for an open debate which takes the plurality of voices and central concerns of the affected public into account. However, TAFTA/TTIP is not only a trans-regional project, but alsohas considerable global implications (or negative externalities) that need to be discussed as well. Many stakeholders from the global South already fear that the transatlantic trade and investment partnership will sound the death knell for the currently stalemated Doha Development Round, which is basically divided between developed nations on the one side and developing countries pushing for fair trading conditions on the other. Thus, by taking a new initiative with TAFTA/TTIP, the US and the EU as the two biggest economic powers may relieve the WTO of its central position in the global process of trade liberalization. Membership in their exclusive club will be open to third parties as well, yet once the rules are set, the motto basically is ‘take it or leave it’. Multilateralism may thereby well be dealt a body blow. Even heavyweights like China are getting increasingly nervous as TAFTA/TTIP is also meant to put decision-makers in Beijing under pressure by establishing new international standards and defining what is ‘fair’ trade in a way that, first and foremost, benefits the transatlantic community.

Nonetheless, what Europe and the US really need is a much more inclusive debate – internally as well as externally – instead of just focusing on technical and jurisdictional details. In other words, both partners have to show that TAFTA/TTIP has the potential to become advantageous for more than just a handful of transatlantic elites who appear anxious about their own societies and various economic newcomers from ‘outside’. Rather than rushing headlong into things, Europe and the US should come to a beneficial agreement in the best sense of the word. This again will require time and effort. Otherwise, a real happy ending for the transatlantic narrative will remain elusive.