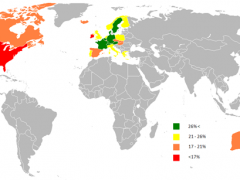 Whenever I hear about the so-called “welfare-state model”, I always think of Polygraf Polygraphovitch Sharikov. He is a protagonist in Mikhail Bulgakov’s fantastic story The Heart of a Dog. In the early days of the USSR, a professor-surgeon created a hybrid between a dog and a man, which turned into a wild and ignorant lumpen-proletariat called Polygraph Sharikov (Sharik is a typical Russian dog’s name and -ov is a Russian male surname ending). A communist instructed him to study the correspondence between Engels and Kautsky*. When the professor asked him how he liked it, Sharikov answered:

– I don’t agree.
– With whom? With Engels or with Kautsky?
– With both.
– It’s wonderful, by God’s light. But what could you offer from your side?
– What can one offer?.. They write and write… some congress, some Germans… My head is swelling. We should take everything and divide it.

The “take and divide” model was the local USSR embodiment of the “welfare-state” model which began being promoted in 1917. Social equality was reached by the physical elimination of those who did not agree to be equal. A Russian poet called this system “guaranteed poverty”: no starvation, but no prosperity either. It had nothing in common with Bismark’s Sozialstaat or the British and American welfare-state models. As we know, the European systems were based on a fair redistribution of higher taxes.

But how does it work in modern Ukraine? Wealthy families with 1-2 children pay taxes to give welfare to problematic and poor families. However, the latter freeride on their children’s allowances, spending almost all the money on alcohol. This is especially widespread in little provincial towns where people’s incomes are very low. Children from poor families don’t get decent education and become criminals. In this way the welfare-state leads to a growth in the crime rate. Sounds funny, doesn’t it?

I guess plain redistribution of money between poor people is not enough today, after all it has already deadlocked Ukrainian economics. For a long time our government has subsidized part of the price of natural gas from the state budget. It was mostly a matter of politics, not economics, because high gas prices lead to defeats in elections – and as we know, electoral strategy is decisive in developed countries too. But today we have a real disaster on our hands with our financial system where the state budget deficit has reached the 4 billion euro mark.

But is there a way out? The government and NGOs should find ways to make money available for poor people, but they should distribute it with conditions attached while also empowering the poor to become self-sustainable. One example of such self-empowerment in the Ukraine is the Prosto Neba (Under the Naked Sky) magazine from Lviv city. It is a local periodical that draws attention to the problems of the homeless. The magazine is distributed and sold only by homeless people and half the income earned goes to them.

Volodymyr Hylenko is homeless and he earns money by selling “Prosto Neba” magazine. (Published with kind permission of “Oselya”).

The magazine is only a small part of the “Oselya” (Home) mutual-aid society where homeless people live and work. In 2011 its income was 112.573,5 EURO, 44% of which was earned by the homeless. That’s quite impressive don’t you think?

It’s a pity then that the Ukrainian government is going ahead with its suicidal policy. But hardly surprising: when people depend on the government in power, they will support it come what may, and no matter what criminal shortsightedness it may display.

*Karl Johann Kautsky (October 16, 1854– October 17, 1938) was a Czech-German philosopher, journalist, and Social Democrat theoretician. Kautsky was recognized as among the most authoritative promulgators of Orthodox Marxism and was called by some the “Pope of Marxism.”