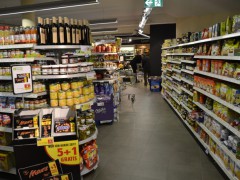 As far as I know I have never thought about free trade apart when I had to during university classes which is probably a solid enough indicator that this topic is rather remote from my personal concerns. So either I take for granted the advantages that come with the European Union’s common market – the most advanced form of (free) trade around – or the effects of free trade really do not affect me personnally. Which could it be?

Would limited trade really effect the decisions we make in our daily shopping for groceries? Photo taken by High Contrast on Flickr (CC BY 3.0)

The best way to find an answer here is to imagine an EU with trade barriers. What if we, the consumers, still had to pay taxes on goods imported from our EU neighbors? Well, I can hardly imagine that this would stop me from buying French wine, Spanish ham or Italian cheese. After all, the European Common Market is not that old, and it’s very likely that people bought and demanded fewer imported products before the cancellation of tariffs within the EU. Even so, trade barriers do not stop consumers from asking for products when there is no free trade agreement with the country the goods originate from. Otherwise, for instance,  Germany, which has no free trade agreement with China, would not import as many Chinese goods as it does.  Though you could argue that purchasing goods from China is relatively inexpensive which makes imports from Beijing attractive. Still, paying tariffs does not seem to halt consumers from acquiring fashion or toys from the Far East.

Isn’t the real merit of free trade mutual trust and understanding? Photo by Pahpaha (CC BY 2.0)

So what is the real merit of free trade?

Doubtlessly there is an economic side to it. No one can deny that the European Common Market or the forthcoming EU-US free trade agreement are beneficial to producers as well as consumers since they mean lower costs and prices for both groups. Yet especially within the European Union I have the sense that there is more to it than just an economic advantage. It is rather the associated values and ideological dimension that seem to create the true virtue of free trade in general and the cancellation of trade barriers within the EU in particular.

What I mean is that giving up protectionist measures requires mutual trust or at least a common understanding of economics as well as politics. To put it more bluntly, the shared idea of a liberal and open-minded (economic) order is a prerequisite to establishing free trade agreements. So to arrive at an understanding in this context, what is required is a certain measure of like-mindedness. Thus establishing economic ties with countries whose mindset is akin to our own can only be in our very best interests since through such economic ties, a more thorough political tie can also be woven. That is exactly the way the political dimension of the European Union was created after the European Community started out as a purely economic project. Though the EU common market might be a singular phenomenon, free trade agreements are fairly well established all over the world. So we should see this way of economic activity as a chance not only to save costs but also to bring other countries closer to us in political terms.

Since the European Union seeks to establish free trade agreements with countries that are not (yet) all that close to our (political) value system such as those in the Gulf Cooperation Council, cultivating economic relations with such a group of countries may give us the chance to exert influence on their questionable political systems in the long term.

This way free trade is not only of economic value but – more crucially – offers the chance to further the cause of democracy as well.