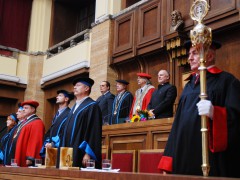 The university tradition in Slovakia started as early as 1405. Some argue that it was in this region that the first technical university in the world was founded.Yet despite this long tradition, Slovak universities score miserably low in world university rankings nowadays.

This does not mean that the education they offer is necessarily bad. Other factors may do more in explaining their low ranking, such as the comparative lack of research articles from Slovak universities in prestigious scientific magazines. To be honest, for universities from countries like ours it is very hard to meet to all the international criteria such as the number of Nobel laureates or foreign lecturers.

Thus one of the main reasons why foreign students choose Slovak universities is that their fees are lower than those of other western universities.

In such a small country as Slovakia there are now no less than 39 universities of which 12 are private institutions. Thanks to the former socialist era – when education was free at all levels – there is no tradition of tuition fees.

Despite this, some universities have started to demand tuition fees, sometimes hidden in various fees or “sponsorship”. Cases where some external students (students not studying full-time) were asked to pay for tuition have ended up at the Constitutional Court. The decision of the Court was quite freely formulated, and finally interpreted in the sense that all external students must pay up.

The current minister (in office since April 2012) said he would tend to reinterpret it differently: the first university you go to (regular or part-time) is free; only if you decide to take a second degree do you need to pay.

Advocates of universal payment believe that it would bring not only extra money but also more responsibility. Paying students would be in a stronger position to request higher quality. Do not be surprised however: we’ve had highly publicized cases where (part-time, non-technical) students (including various politicians) were willing to pay to get an easy fast track degree instead the alternative course of high quality yet more demanding education.

Of course, nobody expects that young people from all social groups will be able to finance their studies. As it is now, poor students have problems enough in paying for their accommodation and other related expenses. The current Slovak student loans fund is under police investigation, not just for suspicious financial transactions but also because of the huge fatcat salaries of members of its former board.

Against this backdrop, some thought has been given to establishing a system of affordable loans where payment would be based on how much the person actually makes in the labour market. This would mean that better paid professionals could return to the system of student loans much more easily than those who are  less well paid.

One of the arguments against fees is their alleged immorality, in a context where the government allocates a percentage of GDP for education lower than the average in the developed world. Another interesting discussion point is the fact that Slovak taxpayers are currently also financing the education of young people who leave the country immediately after graduation.

Actually Slovak education (like all other public services) is underfinanced. The results are low wages for teachers and other staff, especially on the lower levels. In the village where I’m living you can often read on the public noteboard that kindergartens and primary schools in the area are wanting to recruit teachers. My classmates from secondary school who studied pedagogy, after just a few months of teaching experience, are now working in banking, broadcasting and even as a sales rep for industrial adhesives because of the better money these jobs pay.

Some students see pedagogy as a soft option for getting a university diploma and have no real intention of teaching after graduating.

Before the current economic crisis set in nearly everyone wanted to be a lawyer, an economist, a manager, a marketing or advertisement expert or a medical specialist. So few young people were interested in the technical disciplines that the Faculty of Chemical and Food Technology – one of the best in the country – started to accept new students without any entry exam.

This has now resulted in unemployment among those young people who chose the most popular professions. Even when they succeed in finding a job, it is often in a different sector to the one they trained for. The situation of  students from the technical sectors is brighter.

Pressure from the Ministry for direct  restrictive regulation of the intake of students is criticized in the name of freedom of choice and free market principles. Ongoing efforts to publish the unemployment statistics of graduates, graded by specific (also secondary) schools, is only a partial help.

One positive aspect is the growing demand from companies based in Slovakia, especially the car industry, which are willing to cooperate with various school levels to train students in fields in which they need specialists. Companies also want greater cooperation with Slovak universities in research projects.

Contact with the real world could lead to academic staff leaving for better paid positions in the private sector. But I’m afraid that there is little chance of changing the privileged position of the private sector vis-à-vis the public sector in terms of attracting graduates in the immediate future – that is assuming it will ever change!