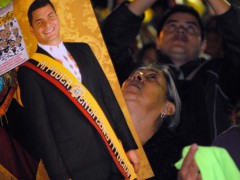 A supporter of President Correa holds up a picture of him on the Plaza Grande in Quito, Ecuador on September 30, 2010. Photo taken by Ricardo San Esteban on "Sosteniendo Utopías," CC BY 3.0

A diplomatic incident has made Ecuador hit the headlines with Britain, Sweden and the USA. From inside the country, we watch it with fascination and suspicion. All because of that sad letter from the British Foreign Office saying that they could remove diplomatic status from the Ecuadorian Embassy building in London. This, of course, due to the diplomatic asylum granted Julian Assange (who has been living for several weeks in the embassy).

Here I can only touch on two possible reasons why Ecuador has granted Assange asylum: 1) to promote freedom of expression of which Assange is perceived to be a champion. 2) to prevent his extradition to the US where he could be prosecuted for WikiLeaks leakage of diplomatic cables, a prosecution which could end in his death. Of course, many here take this alternative as a rallying cry, reviving the ghost of imperialism and seeing it as evidence that Ecuador can be given equal footing with the USA.

Very few care to see the affair in its true dimensions. Why? Because President Rafael Correa is a man you either love or hate. From his series of very successful social policies to his evident air of authority in his public appearances, in Ecuador there is no middle ground.

If we say this  is a move to clean up his image, we could be right. In Ecuador there is a fight on between media and the government based on fallacies and passionate positions that had their high point in two lawsuits brought by the President himself. The first was against the newspaper “El Universo” that included its owners and the chief editor of opinion who wrote a column in which he warned the President that a political opponent could accuse him of crimes against humanity, a warning that was taken by the President as a direct accusation. The second was against the reporters who authored “The Big Brother”, a book about the business dealings of the President’s brother with the state. The focus of this case was that the book claimed the President knew about these businesses, and could not tolerate their being made public. The President’s claims were made under the guise of “moral damage”. He asked great deal of compensation  – USD 100 million in total – but in the end, the judges reduced the amount to a still substantial sum and the demands were rejected due to pressure from international organizations.

In Ecuador we have had people detained for hours, accused of saying something offensive or putting the President in an unfavorable light. In Ecuador, the President has a regular television show, broadcast every Saturday by TV channels and radio stations, and on it he has held up photos of media publishers to let people know just who are against government projects – and of course, some publishers have received all kinds of threats as a result of such exposure. In Ecuador, the National Telecommunications Council, CONATEL, has  recently issued a new regulation that allows the state to obtain the IP addresses of anyone, with only an administrative order, thus doing away with the need for a judicial warrant.

We even have mixed messages from the authorities. When foreign journalists asked if Ecuador could put someone like Assange in prison for revealing the secrets of Ecuador, Foreign Minister Ricardo Patiño responded to Al Jazeera:  “Surely not. It wouldn’t be necessary to put him in prison. If he’s only exercising his  freedom of expression and did not break any law, he shouldn’t be in prison”.  Yet on the other hand, President Correa told The Guardian that: “Probably if he committed an illegal offense there would be a trial. I don’t agree with everything Mr. Assange did. I’ve never said that”.

It’s very hard to argue that freedom of expression has been the real reason behind the decision to grant asylum to Mr. Assange. Some have tried to distort the question of asylum with arguments like “Why should we pay for the flight of this man when he comes?”  a common question these days on Twitter. They even have said that Assange is a rapist and should  serve his sentence, without any review of the case information or understanding of the prosecution of sexual offences under Ecuadorian law. “Sex by surprise”, which is what we know Assange is being accused of, is not a crime in Ecuador. So far, no women’s organization has come out in favor of the charges or his extradition to Sweden.  We also need to understand that Ecuador has asked Swedish prosecutors to come to the embassy in London to question Assange (something that has been done in other cases) and the Swedish judicial authorites have refused. There is still much to investigate and respond to.

Yet other people take it as the move of a sovereign country that is not intimidated by the USA. This new take on imperialism has served the government, six months before the presidential elections, which can now retrieve the left wing credentials it has somewhat lost these past years.  Most people linked to the left wing (such as indigenous and labor groups), who were initially part of  Correa’s project, have now moved to the opposition. So, the political usefulness of such a ploy is pretty obvious.

Anyway, why did Ecuador decide to give him asylum? And why did Assange specifically chose the Ecuadorian embassy in London? There’s no way of knowing, at least not now, in the present state of confusion.

The government’s attitude and journalists’ blatant disregard for their code of professional conduct makes it impossible for us to consider Ecuador as a haven of freedom of expression. Nor can the diplomatic asylum granted Assange be taken as evidence of this. It’s just a country’s decision to take someone in on account of possible dangers to his life. But if you say in Ecuador that you agree with the decision to grant Assange asylum, people who are against Correa will take it as a statement in support of him.  Like for being in favor of the decision you transform yourself into a fanatic. Such is the state of the country that has given asylum to Julian Assange.