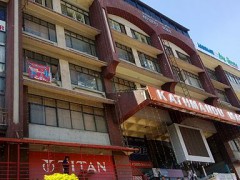 Even when I was growing up in Kathmandu during the past two decades, there were obvious signs that the city was increasingly connecting up to a globalized world. International brandnames, for instance, were slowly making their appearance in Kathmandu’s street retail outlets. You used to go to the big bazaars, wriggle your way through the dense crowds, find what you were looking for, bargain for it until a price was agreed, and bear it home in triumph. If real brandnames and established shops were not what you wanted – because they didn’t suit your taste or your pocketbook  – there were plenty of smaller retail establishments. Selling cheap replicas or knock-offs from China, Taiwan, and India, they gave Nepalis value for their money. But consumerism is not static and the market is evolving yet again.

One new way of reaching consumers, shopping  malls have mushroomed all over Kathmandu. This evolution in shopping environments is not simply a matter of economics as the reverberations of this growing “mall culture” are impacting across the social networks and cultural norms of Kathmandu life. As malls become the preferred places where affluent Kathmanduites go for entertainment and shopping, they provides them with a cultural space the likes of which they have never had before. Good restaurants and cafes, state-of-the-art movie theatres, and leading international brandnames  are their unique selling point. With all of these under one roof, the very act of socializing in a mall turns people into dedicated consumers.

Kathmandu has seen a boom in the number of malls over the past decade. Photo by Krish Dulal, CC-BY-SA-3.0 (http://creativecommons.org/licenses/by-sa/3.0)], via Wikimedia Commons

This changing economic landscape is the result of a number of structural factors. Nepal began to implement its Structural Adjustment Program (SAP) initiated by the International Monetary Fund (IMF) and the World Bank in the mid-1980s. The Import Substitution policy, through which local production of goods was encouraged, was discarded as the country signed up for the first phase of SAP in 1986-1987. The second phase of SAP in 1989/90 further reformed regulations governing the import of goods. Tariff and non-tariff barriers were reduced as the Nepali market was groomed to welcome foreign goods.

The past two decades have also seen the beginnings of an intense cultural, social, economic and political upheaval in Nepal  in the course of which huge numbers of Nepalis have migrated to the West, the Gulf, and South East Asia. These workers sent remittance money back home which increased the purchasing power of the people. At the same time, inspired by rapid urbanization, fuelled by the 1996-2006 civil war, and a spurt of growth in the service sector a land development boom  has further cemented that purchasing power.

As Nepali society becomes exposed to the lure of the West through movies and migration, it wants to emulate that Western sense of comfort and luxury. And shopping malls are a perfect place to start:  people spend their time there purchasing or with a desire to purchase. However, such decadent consumerism seems out of place in a nation ranked 153 on the Human Development Index. In a country with a huge agrarian population and desperate poverty the growing dominance of malls seems bizarre, especially when they hardly feature any locally made products. And  given the constant criticism about the failure to invest remittance money, such temples to instant gratification seem positively cynical! According to the Asian Development Bank, remittances contribute 22 per cent to Nepal’s total GDP. Yet this inflow of money is spent on the import of non-durable consumer goods instead of investment for capital formation. Malls facilitate such imports and are complicit in it.

However, the traditional bazaars are not yet dead. While economic and cultural globalization has reached the Nepali market, the extravagant prices for goods in the malls can hardly be afforded by the large majority of Nepalis, or even Kathmaduites. And this is why traditional bazaars and single retail outlets survive.

The charms and blandishments of the malls have captivated a creamy layer of the affluent Kathmandu middle class. Perhaps here they find a comfortable space where the guilt of affluence can be temporarily assuaged. But Nepal exists in multiple, often contradictory, worlds; its markets and economics too have multiple facets of which malls are but one. Yet the rise of shopping malls in Kathmandu has made me and other urban Nepalis wonder just where we and our country stand in the world’s neo-liberal economic system. Negotiating our place in the labyrinth of economic globalization is the challenge of the future. The small vendors and the traditional bazaars have ensured that we are not yet lost. Will Kathmanduites  continue to patronize them despite their love affair with globalization?