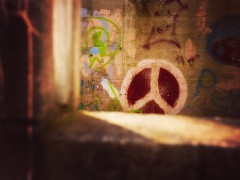 Peace can be found. Photo taken by JimmyBrown on Flickr (CC BY 2.0)

Nearly seven billion human beings live on this planet called Earth. Although these seven billion belong to the same species, they are very different. Hundreds and maybe thousands of beliefs occupy their minds. Differences in race, ethnicity, culture, and geographical position have turned mankind into a competing, violent, intolerant race of creatures!

All this chimes in well with Samuel P. Huntington’s theory of the clash of civilizations which emphasis the impact of religious and cultural differences on the international community. According to Huntington, the clash of civilizations in inevitable, and results from everyone’s belief that his/her belief/culture is the right and superior one. But is this hypothesis right?

Personally, and by testing this hypothesis and examining its significance in today’s world, I’d say yes, since nearly all the conflicts arising all over the world are due to religious or cultural differences.

Take the example of Jammu and Kashmir, the Kurds struggle against the Iraqi and Turkish governments, and, most significantly, the never-ending Palestinian-Israeli conflict.

Cultural and religious differences are what are driving these conflicts towards infinity. Take this and what I’ve said in the previous few paragraphs and you might conclude that I believe in the non-ending clash of civilizations. Surprisingly, no, I do not!

The social sciences are much more complicated than the natural ones. There is no 1+1=2 here! Yet some social theories prove to be true, and persist for decades and maybe centuries, while others die in their cradles.

Huntington’s theory is definitely of the persisting type since it has lots of evidence that proves it right. However – and even though I agree with the existence of the clash of civilizations – I still believe that there is hope for peace and co-existence between religiously/ culturally different human beings.

What I am sure of is that despite the existence of lots of different faiths, all of them have common visions and targets. All beliefs call for peace, co-existence and good morals. Similarly, all cultures seek development and prosperity which should not depend on destroying or erasing other cultures.

The initial point for reaching peace and cooperation between people of different beliefs and cultures is having consensus that all beliefs and cultures have a similar set of goals. Starting from this point, we can construct our cooperative human building which includes everyone in a homogeneous global community that respects the cultural and religious features of every faith and culture.

In order to test my controversial hypothesis, I should examine it in one multi-cultural/religious society, so let’s take my own country, Egypt, as an example.

In Egypt, we currently have two main faiths – the Muslim faith and the Christian faith.

As a matter of fact, Egypt has lately witnessed lots of sectarian incidents. Incidents such as insulting people of Christian faith and burning the Bible in public view, reacting to the “Innocence of Muslims” movie which insulted the Islamic faith, all definitely add credence to Huntington’s “clash” theory.

Indeed you might think that choosing Egypt as an example is a catastrophic choice as the current sectarian crisis in Egypt is enough to prove my “controversial” hypothesis wrong. For this reason I would like to rephrase my hypothesis in a clearer short paragraph:

Now it should be clear that believing in the goodness of other faiths / religions is the missing variable in the peace equation. This is the cornerstone on which my hypothesis rests.

In Egypt, if we believe that both Christianity and Islam call for peace and good morals, if we can ignore the radicals calling for attacks on others just because they have different a faith, ideology, race …etc, then we would definitely be doing what our beliefs ask us to do – building peace and good morals! In such a case, tolerance and co-existence will be possible in Egypt, even though we do have different religions – said to be in an “inevitable clash” by people like Huntington.

Indeed, it is nearly impossible to convince everyone that all beliefs and cultures are peaceful and should be respected. However, believing in the correctness of this hypothesis should remove the whole “endless clash of civilizations” stereotype from the minds of a lot of people and eventually lead to a new generation, believing in this new hypothesis, respecting and cooperating with others, and seeking a new international community, a truly peaceful one!