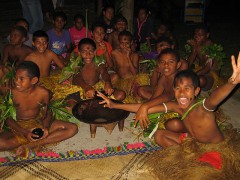 Rapid modernisation has caused Fiji to adopt new cultural trends that are at odds with traditional customs. Kava  is a drink that is usually served at formal ceremonies such as meetings of village elders and chiefs but as a result of modernist influences, it has become a commercialized commodity rather than a ritualistic practice. Kava is known as Fiji’s national drink and is made from the roots of the kava plant. It has effects similar to those of a mild sedative, has psychoactive properties and was originally drunk only by male high chiefs. Companies began advertising and heavily promoting kava knowing that it was a money-spinner, and now the drink is even available in bottled form. It is mainly drunk by men of all ages as there is no age restriction on the sale of kava and it’s available in almost every store. Driven by heavy advertising and promotion of the drink, a worrying social trend has emerged that has an especially negative impact on rural women trying to break the cycle of poverty.

The Fijian custom was for men to gather in social groups to drink kava while the women were expected to wait on them and do the housework. Historically, when male high chiefs drank kava, it was the womens’ responsibility to tend to them as part of the ritual known as ‘kavakava’. Fiji is a society where women manage the household and the finances. Modern economic pressures mean that people living in rural areas must travel to the cities for work. Women, expected to manage the finances, also earn the income while it is acceptable for men to gather to drink kava.

However, the increase in kava consumption has created a significant social problem. As kava becomes more readily available, it has had an impact on the productivity and social fabric of families in Fiji.

Kava roots-the source of the national drink, by prilfish, on Flickr CC BY 2.0

Consequently, over the past few years various organisations and villages have begun banning or limiting kava. On the Island of Ovalau, kava bans have significantly increased crop production. For Fiji, such bans have cultural implications as they go against centuries of culture and tradition. But kava directly affects the nervous system and numbs the body making people lazy and unproductive. This has seen men indulge in ‘kava drinking sessions’ that force women to act as both breadwinners and homemakers, while the consumption of kava by men increases. As rural women are expected to fulfil these roles, they are unable to access other opportunities that would normally be available to women. Roko Tui Vuma Usaia Delai was the chief behind the kava ban in Ovalau.

“Before, men were drinking kava till three in the morning, or daylight so farming levels were pretty low. Village elders sat down and decided we couldn’t carry on like this so the ban was put in place and it even applies for funeral gatherings that will only take place at the weekend when kava consumption is allowed. We’ve noticed the change this ban has made already because some of our men have expanded the size of their farms and have as many as 3000 yaqona plants and so much more dalo,” he said.

A kava ceremony, photo by Brian Dearth, on Flickr CC BY 2.0

Males learn the tradition at an early age, by Melody Tan, on Flickr CC BY-NC-ND 2.0

Areta Tuvuki travels with her husband the long distance from her small rural town to the Suva flea market every day to sell handicrafts and earn a living. She is usually left to manage their stall while her husband sits around with other men at the market and consumes kava.

“Times are hard and most days we don’t even make a single cent. But we do make a bit of money when a cruise ship docks at the wharf because tourists are very eager to buy our local handicrafts. Most of the money I make goes on feeding my four children and travel expenses,” says Tuvuki.

Areta selling her wares at the Suva flea market, by author

Tuvuki does not see anything wrong with having to tend her family’s stall alone while her husband sits around drinking kava, as it has become a culturally accepted practice. On average they make about $30 to $40 Australian dollars a week and none of it can be saved for education or an emergency. In Fiji, having only one member of the family earning an income is not enough to meet rising living expenses.

Some steps have been taken to address this issue such as with the banning of kava in certain areas, but as a cultural tradition, it will take time before society will change its values towards women’s rights.