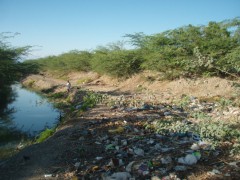 In Canoa, Barahona, Dominican Republic, trash piles up next to a polluted canal in 2008. Residents say there is a lack of municipal infrastructure to deal with an influx of waste in the rural town of 3,000. (Photo by the author.)

Nina needed a place to put her trash. The rusty garbage bin near her house, like the bin down the street, was filled to the brim just days after the town’s garbage collectors made their weekly visit to Nina’s street on the edge of Canoa, the rural southern village of 3,000 where I lived as a volunteer in the Peace Corps from 2008-2010.

Nina found a convenient solution: she dumped her waste in the irrigation canal behind her house. By 2008, mothers like Nina were warning their children to stay away from the murky water. The days of swimming in the canal in Canoa were over, they said.

Canoa’s mayor made an effort to keep up with an influx in trash as steady growth in banana exports buoyed a segment of the local economy. However, citing limited budgets, which come almost entirely from the central government, he allowed pollution to pile up in the nearby trash heap that served as a landfill, and to clog Canoa’s irrigation canals, causing frequent blockages and a fetid smell. Many residents, including Nina, thought the mayor and other politicians should do more.

The problems facing Canoa are not unique. They reflect the broader challenges the Dominican Republic faces to control the environmental ramifications of two decades of rapid economic growth. Carbon emissions have more than doubled since 1990, and the UN identified solid waste management (pdf) as a key challenge for the DR to address if it is to meet the Millennium Challenge Goals in 2015. On the World Economic Forum’s Environmental Performance Index, the DR ranks an abysmal 94th in maintaining a healthy water supply.

Yet Dominicans have not watched impassively as their environment deteriorates. Frustrations over the government’s inability to manage the negative results of an expanding economy boiled over in 2009 when leaders announced plans for the construction of a high-pollution cement factory adjacent to Parque Los Haitises, a nature reserve in the eastern part of the country. Protests erupted in several cities, including the capital, Santo Domingo. Citizens felt politicians were unconcerned and unprepared to deal with the environmental and health ramifications of a major industrial project near the park.

The government scuttled plans for the cement factory in 2009 in the face of protests and a damning report by the United Nations. With months, however, protesters, re-energized, returned to the streets of Santo Domingo, Santiago, and other cities to rally against Canadian mining company Barrick’s plans to renew activity in the Pueblo Viejo gold mine in a verdant northern province.

Protests against the cement factory and gold mine that began with environmental concerns in 2009 continue in 2013, and have widened to include a broad range of misgivings about the effects of aggressive growth-first economic policies in the DR. Protesters have cited concerns about health, labor, and education.

Activists in the DR have good reason to question the implications of the country’s growth-first policies. Although Dominican GDP has grown six fold from 1990 to 2010, nearly twice as fast as the regional average, underinvestment in public services has compounded the environmental degradation that I witnessed in Canoa and that spurred protesters to react vehemently to the proposed cement factory and gold mine. And even though per capita GDP (PPP) increased from $2,800 in 1990 to $9,000 in 2010, the proportion of Dominicans living below the poverty line over the same period remained unchanged at 34%. There are more poor people in the DR than ever before. Leaders of municipalities like Canoa complain of insufficient funds from the federal government to meet new challenges. National gains in health and education, though laudable, are not commensurate with economic progress, and should satisfy no one.

Three years of protests failed to prevent Barrick from resuming operations in the Pueblo Viejo mine, which reopened in August 2012. However, pressured by protesters, Dominican President Danilo Media renegotiated terms with Barrick in May 2013, resulting in a reported 600% increase in net payments from Barrick to the government. Far from perfect, this concession is still a tacit admission that policies like the one that had allowed Barrick to resume mining were misguided, and will hopefully lead to a model of growth more concerned with protecting the environment and the public interest.

Protesters in the Dominican Republic recognized that growth-at-all-cost policies are not sustainable. They should continue to hold politicians accountable for the environmental costs of aggressive growth – until Nina has a place to put her trash.

Jonathan is from Cleveland, Ohio, though over the past few years he's lived in Barahona, Dominican Republic and Piura, Peru. He currently lives in Boston, where he is studying international trade and development as a master's degree candidate.