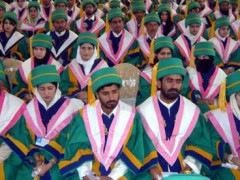 Not too many years ago I used to commute regularly with three brothers, all of whom were students in one of the most reputable schools in the city. The eldest was completing his secondary school; the youngest had yet to be initiated into primary education whilst the third brother, sandwiched between the two, was almost done with his primary education. The trio of brothers, from what I could observe, seemed to belong to a well-off family, were all well grounded, lived in a posh part of the city and so on and so forth.

Curious,  I once inquired of one of them what their father did and the young gentleman proudly proceeded to tell me that his father was a cab driver in NYC. Skeptically, I asked him if he meant his father was a taxi driver. He indignantly riposted that his father was a yellow cab driver in NYC (New York City) and drove a Mercedes – a car, he pointedly told me, that I could not afford here in Pakistan. I later learnt that the eldest brother had graduated from high school and was now enrolled in a prestigious university in the country whilst his younger sibling was successfully on his way to graduating from a very respectable high school in the city.

These encounters, to which I didn’t attach much importance at the time, later made me wonder just how many other such families there were in my city not to mention the rest of the country. Families where such opportunities would not have been available if the bread winner had not migrated abroad in search of a better livelihood. I’m quite sure that even in the anecdote related above, that without remittances from abroad it would have been quite impossible for any of the three brothers to have received their basic education from the educational institutes they studied in. It would also have been highly unlikely for the eldest brother to receive any university education much less to enroll in his current institute of choice. With the skill sets  available to their father, quite frankly speaking, such ‘luxuries’ would simply not have been possible had he sought his fortune in Pakistan.

On studying the matter further I found some interesting statistical correlations, which to a discerning eye would have seemed pretty obvious. The monetary value of the remittances being sent back to Pakistan, for instance, has a positive relationship with literacy levels in the country. From 1998 to 2005, a period when Pakistan’s economy experienced bubble growth and remittances increased several fold, the literacy rate in Pakistan also increased from ~43.5% – with leeway for figures provided by different surveys – to 50% or 54% depending on which sources you base your analysis. From 2005 to 2009, this rate again rose to 57% and was at one time projected to show 2% annual growth. It should be noted that this period, except for the record remittances, was one of economic downturn and political unrest. It should also be noted that several of these years saw budget cuts for the education sector in Pakistan and 2009 saw only 2.7% of the budget allocated to education. Yet remittances, as has already been seen, have continued to rise and 2010 itself saw record sums being sent back home. In the first fiscal half of 2010, ~ USD 5.3 billion were sent back home, a 17% increase over the ~ USD 4.4 billion for the same July – December period for 2009. During this same period Pakistan’s exports amounted to a mere USD 11 billion.

Whilst the accuracy of these figures may not be reliable, as most surveys and results published were done by parties with vested interests, their implications most certainly are. The higher the sums being remitted back to Pakistan the greater are the windows of educational opportunities opening up to the youth of Pakistan. Whilst it might be very plausible that the Pakistani workforce is highly skilled and is thus able to send back greater sums every year, the facts unfortunately show another story and indicate that the increase in remittances is the direct result of  greater numbers of skilled Pakistani workers leaving the country every year in search of a better livelihood. So whereas youth is being given opportunities to become contributing members of society and a pool of skilled Pakistani workers is slowly being developed on the one hand, on the other hand the very same workforce is leaving the country in search of a better life, if not for themselves then for their families in Pakistan. Simply put, there is a brain drain taking place in the country which is detrimental to its growth. The vistas of opportunity opening up are counterbalanced in equal measure by the increasing rate of outbound migration – as of 2010, Pakistan ranks one 167th on the list of countries with a net migration rate of -2.17.

Even though all these facets point towards a global, highly mobile, highly adaptable, skilled Pakistani workforce indicating a strong Pakistani presence and impact in several key regions of the world, the fact of the matter remains that all this is occurring at the expense of development in the home country. Increasing numbers of youth are leaving the country in search of better opportunities, hoping that the grass is greener on the other side. This is the very same youth for which better opportunities are now being provided by those already settled abroad. Such is our plight that despite having the 10th largest workforce in the world, Pakistan’s most productive export is its labor force – exported mainly to the Middle East due to the relatively low procedural costs and ease of adaptability.

It should be noted that while the vicious migration cycle that has been set up – and is, surprisingly, steadily worsening as the literacy level in the country improves – might eventually balance out, the damage done to the country through these remittances is irreparable. Unless employment opportunities open up, it will be impossible to retain the skilled workforce that the country is developing. And since the skilled workers now exploring the market cannot find such opportunities and are not willing to wait to the detriment of their dependents, market expansion cannot take place. And until that happens, neither growth nor development can take place in the country, which will weaken it even further in the region.

This precisely is the country’s dilemma at the moment. Its exports amount to a little over double the value of the remittances it receives and are exactly half the value of its imports. And the cycle set up by remittances, education and migration has spiraled out of control. Unless the later is not amicably dealt with, the former cannot be resolved.