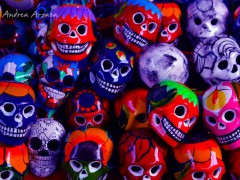 Every year in early November, the “Day of the Dead” is celebrated in Mexico. It’s a public holiday that reflects a mixture of pre-Hispanic festivities from the Aztecs, combined with the Catholic influence of All Souls’ Day brought in by the Spanish conquest. This day is one of Mexico’s most important, colorful and fun holidays.

A decorated grave during the Day of the Dead in Mixquic, Mexico (November 2013). Photo by Andrea Arzaba.

Ever since I was a little kid, I can remember celebrating the Day of the Dead with my family. I would always help my grandma set up a customary offering (ofrenda) by cleaning a table or a special place in the living room for setting up an altar. The offerings are dedicated to each member of the family who has passed away. The altar is decked with pictures of the deceased and some symbolic personal belongings such as toys if they were children or pipes and cigarettes for adults. Candles are lit on the altar and help light the way for the spirits, among  bright yellow Cempazuchitl flowers, candy and chocolate skulls.

In some villages, people believe that the souls go to the cemetery before coming to their altars; this is why they decorate the graves as well with flower petals. Some families spend the whole night in the cemetery and make a cheerful party of it, eating a communal dinner, chatting to their neighbours, and playing music through the night.

Yet the original Day of the Dead tradition is changing. I can see this in my own family. My grandma spends days preparing some special dishes and takes time to plan a big altar for my grandfather. My mom is more practical; she doesn’t bother with an altar every year, and when she does, she doesn’t adorn it in such elaborate detail. Nor does she prepare any special dishes, limiting herself to a couple of fruits and maybe some flowers. I see it happening with my own friends as well. I wonder how this tradition will change when my turn comes to prepare the offering.

During this year’s Day of the Dead, I stayed in Mixquic, a small town near Mexico City where the tiny cemetery around the church glows at night with the light of thousands of candles and is cloudy with the thick smoke from copal incense. The celebration becomes an intimate time dedicated to the souls of loved ones – not only for the ones that have passed away but also for those who are still alive.

A woman in Mixquic decorating the grave of a loved ones in the middle of the night, next to many other families (November 2013). Photo by Andrea Arzaba.

On my way to see the decorated graveyards, I was surprised to notice the number of flashes from cameras in the dark and the many languages I could hear walking around the graves. The cemetery was certainly full of people, but the majority of them were not locals but outsiders (and I was conscious that I too was a stranger here).

“I wonder if such an intimate celebration is not being spoiled by the number of camera flashes people are exposed to trying to pray for their loved ones”, my friend mused. This thought crossed my mind as well when I listened to the raucous laughter of a group of visitors next to a grave where an old woman was setting up an altar. She seemed to be upset by their noise and kept staring at them, but she didn’t say anything , she just continued patiently placing flower petals in silence.

A boy in Mixquic observing a grave in the cemetery.

We stayed there enjoying the fragrance of flowers, watching the smoke of the copal incense and listening to the quiet murmur of the prayers in the town. Yet such memories of calming traditions are disrupted by the insensitive loud voices of people like us, outsiders. Later, a local Mixquic man explained to us the importance of this celebration for his family, and said, “What bothers me is when foreigners come and laugh at our traditions from our Indian past and think they are something  primitive and dumb.”

Would it be better for the villages to keep the cemeteries closed to outsiders? Can the distinctiveness and importance of this tradition be kept when outsiders interfere?

The truth is that a lot of foreigners come to enjoy the spectacle for its uniqueness. Even if this means a lack of privacy for most people setting up their altars, it also means increased income during these holidays. For example, in 2013 the district of Tlahuac, where Mixquic is located, reported that 50,000 people had visited the Day of the Dead festivities – and all of them consumed food and drink, bought flowers and possibly even spent some money on crafts made by local artisans.

The festivities for the Day of the Dead earn the Mexican economy more than 22 billion pesos (around 1.25 billion EUR) says the Confederation of the National Chambers of Commerce and Tourism Services. The best selling products during these times are flowers and food. Also people take these vacations as an opportunity to travel the country. Usually vendors hope to use their gains to offset the year’s low sales, especially flower sellers who face stiff competition from imported flowers.

The economic gains of the Day of the Dead are not only felt during the official days of the holiday, however but continue throughout the year. In Mexico it is common to see the sugar and chocolate skulls of this celebration being sold as souvenirs all year long. Also, the figure of “The Catrina” (an elegant skull) and the stylized skeleton are encountered in many products on sale all the year around.

A display of souvenir skulls in Mixquic (November 2013). Photo by Andrea Arzaba.

So, is the sense of privacy and intimacy a being sold down the river by such a tourist invasion? Will the Day of the Dead lose its unique character by becoming too commercialized?

Now, it is almost impossible to stop commercialization of traditions in our globalized world. Even so, I am confident that the Day of the Dead will never be forgotten; instead it will be transformed and live on in a new guise just like many other traditions in the world. I can think of many examples such as Christmas, St Valentine’s Day, Easter and Halloween. Can you think of one such example from your own country?