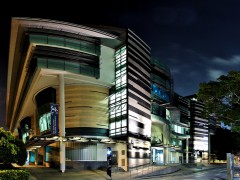 Singapore Management University: One of the universities caught up in the government’s quota debates; erwinsoo via Flickr

University degrees are a strange commodity. They don’t surge in value when demand gets feverish but instead, like the shares of a listed company, become diluted when more people get them – as the swamp of fresh, unemployed and frustrated graduates can testify. Perhaps to find a solution, we might look to Singapore, which boasts overall graduate employment rates of over 90% for most degree disciplines.

Yet balancing the equation has become an increasingly complex task for a nation with a population of 5.3 million. A progressively educated new generation is demanding an unprecedented extent of higher education opportunities, testing the government’s ingenuity to build an educational framework that accommodates as many as possible, without becoming too crowded.

Access to education is always a touchy topic, and it’s tricky for governments to explain to people that granting them greater access through increasing the number of university spaces creates academic inflation. Acknowledging demographic realities, local universities have been expanding enrolment numbers: from 9,000 places in 2001 to 12,000 places in 2011, with plans for 2,000 more places over the next few years, such that 30% of every school cohort will attend local universities by 2015.

The numbers game is but one arm of a more understated strategy of creating alternative pathways in the post-secondary education landscape, giving students at the secondary school level more options. There are the polytechnics, which provide a more hands-on pedagogy “to train middle-level professionals to support the technological and economic development of Singapore”, according to the Ministry of Education. These accept students with O-level grades who might not qualify for pre-university education at Junior Colleges, which offer two years of high-school style education culminating in A-levels.

Another way might be via the Institutes of Technical Education (ITEs), which have a vocational curriculum that caters to students who are assigned to the Normal-Technical academic stream during secondary school, due to a weaker performance in the primary school leaving examinations.

This medium of streaming and differentiating education is a model of economic engineering. The system portrays each qualification as customized for a different niche in the labour market. It signals to employers which graduates are suited to which positions and assures qualification holders that there is a job somewhere that specifically requires people like them.

However, the system is beginning to become a victim of its own success. By adopting a targeted approach to each pathway, the government may have inadvertently juxtaposed them to reinforce direct and linear comparison among students. For many, an educational qualification regarded as lower than a university degree is but a means to the degree, not an end in itself.

Polytechnic students are gaining an increasingly voracious appetite for university places. Polytechnics are starting to shed off their ‘second-rate’ image, with an increasing number of top-rate O-level students choosing the polytechnic route for its more hands-on, industry-attuned system of education. Polytechnic intakes have increased almost twice as much as university intakes in the past seven years.

This causes much consternation on the part of public authorities, who are wary of the imbalances that may ensue. This has manifested in informal government restrictions on the number of polytechnic students who can enter local universities. The quotas for polytechnic students, which range from 20% of a given cohort in the engineering or computing fields, to possibly less than 2% for law and medicine courses, are a lightning rod for social indignation. Critics say this reflects an inherent bias against students who might be late-bloomers, or those who prefer a different method of education from the pen-and-paper-dominated pre-university system. While these quotas are unlikely to change soon, the government is looking to more actively soak up the greater number of degree-seeking polytechnic students.

One method is the nurturing of the “non-public” education market. SIM University was established to cater to adult learners. The most recent project is the Singapore Institute of Technology, which collaborates with overseas universities to provide degree courses for “polytechnic up-graders”.

However, this belies a more subtle policy stance; that the ultimate aim is still to strike a balance in which private education degrees retain a significant degree of comparative advantage for polytechnic students, yet are not regarded as completely on parity with the traditional local, “autonomous” universities.

Ultimately, the most effective parry against social indignation is a willingness to leave opportunities open. Polytechnic students still have a shot at autonomous universities, despite discouraging odds. ITE students get their break too: outstanding NITEC performers can enroll in polytechnics and perhaps even university later on. This potential for upward mobility might just be sufficient psychological assurance for students with such aspirations.

After all, any education system, regardless of its features, comes down to two aims: making education accessible, yet valuable.

Wei Sheng Lim is a member of Global21, a student network of international affairs magazines and a partner of FutureChallenges. A longer version of this article was first published in The Oxonian Globalist.