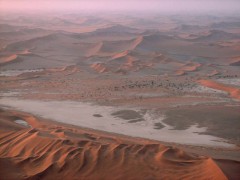 The arid nation of Namibia has a newly discovered aquifer called Ohangwena II, that spans its northeast region, which flows under the boundary between Angola and Namibia. The country is considered one of the driest in Sub-Sahara Africa, as it is largely covered by the Namib Desert. This is especially significant because the nation faces further desertification in the face of climate change.

The 800,000 people who live in the area currently depend on a 40-year-old canal that crosses the Namibia-Angola border for their drinking water. The new aquifer could supply water to the residents of Northern Namibia (who comprise 40 percent of the population) for an estimated 400 years. Historically, the scarcity of drinking water sources in the area has limited the scope of development. The discovery of the aquifer Ohangwena II means new opportunities and new challenges.

In response to this discovery, Namibia’s Minister of Agriculture, Water and Forestry announced on July 11, 2012 that his ministry will host a water investment conference in September to bring together the major players in the water sector. This includes the private sector, as financiers and equipment manufacturers would be essential to attracting private investment. Notably absent from the list of attendees are local residents of Northern Namibia.

The opportunity here is ripe. Public-private partnerships can ensure that all Namibians have access to safe water sources. However, the challenge of balancing profit with sustainability looms overhead. GRAIN’s report entitled, “Squeezing Africa Dry: Behind Every Land Grab is a Water Grab” warns of the dangers of privatizing water resources in the context of increasing water scarcity and increased propensity for water conflicts. These dangers are already seen at the Ethiopia-Kenya border and near Ethiopia’s Alwero River in the Gambella region, where deadly conflict brewed over Saudi Star Development Company (owned by Saudi billionaire Mohammed al-Amoudi) diverting water from Alwero River to its plantation.

This is particularly salient in light of the upcoming Namibia Water Investment Conference in Windhoek, from September 12-14. In many instances, land grabs and water grabs are justified under the name of “investment” and the cited benefits range from boosting food security and bringing business to the area. When local and indigenous populations are excluded from the process, investment comes at the expense of regional food security, land rights and water rights, while undermining smallholder farmers’ access to the market and ability to compete.

What Namibia’s government does next in terms of water management and conservation will determine whether it is another story of exploited resources, water conflict and displaced and food insecure populations, or a story of good governance and conservation.