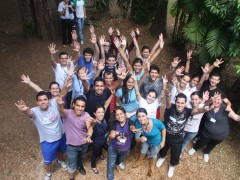 Youth are rising to demand their rights and make adults accountable for the state of the economy: how can youth be involved in the greater decisions of the world so they become part of the solutions?

In The Greater WE, Ulrike Reinhard mentions some of the insights garnered from the Salzburg Trilogue, and one of them touches on the subject of including youth in global governance.

Throughout the world youth are underrepresented in governments and organizations. According to a 2007 youth survey from Costa Rica, less than 3% of youth participate in politics, although it also suggests that this might not be due to any lack of interest but rather to a lack of opportunities. It seems that in most organizations or political parties youth is viewed either as a bargaining chip to gain the youth vote or as a problem that thankfully is eventually outgrown.

Youth is political. Right in my own neighborhood I’ve been able to see just how political they are. The school around the corner from my house has students select a class color for the shirts they will wear every day to school during their senior year. This is not uncommon, most schools do it. My own class wore a black and olive green jacket. Yet the color these students chose would’ve been unheard of back when we were making the same decision 10 years ago: they chose hot pink polo shirts. These young men and women graduating from the high school this year wear the color proudly and I doubt they are unaware of the strong statement they are making through their choice, and how it defines gender roles and archetypes of masculinity and femininity.

It’s just one small example, but I don’t believe these school students are an exception. When it comes to Costa Rica, I can safely say that there are at least 24 young people each year who prove themselves to be agents of change: political, dedicated, committed and actively making a stand to change what they see wrong with their community. After all, just this week I stood side by side with them in front of a group of people receiving our diplomas for successfully completing training in a think tank on youth leadership and policymaking. When you think that only one year ago I was part of that extremely large percentage of youth uninterested in politics, this is quite the success.

Even when signing up to take part in this program, I was skeptical. After all, as a foreigner how could I be in any position to influence policymaking? Being unable to vote, how could I be political? But migrants have rights, and I decided to become an informed migrant. The training showed me so much more.

I had a friend who once laughed at my idea that I wasn’t into politics and declared that “everything was political”. He then pointed out by counting on his fingers how my actions contradicted my words: I taught underprivileged youth how to use computers and online tools to improve themselves. I spoke about creative commons and alternatives to copyright. I participated in a self-produced web show where we provided an alternative to the uninspiring programs on TV. I wrote about countries that rarely make the news. I was completely political. And yet I still insisted that politics wasn’t for me.

It was through this training program that the lesson my friend gave me all those years ago finally started to make sense. Through education my classmates and I discovered all the ways in which we could not only stand up for our beliefs, but also stand up for all those who can’t do it for themselves. And that to succeed, we need to make sure that our neighbors are also fareing well. In our group we had youth leaders from many different areas: from political parties, civilian organizations, NGOs, sports organizations, diversity groups, and all of them were already changing their communities from the inside. What we gained after the training was the ability to pave those paths we had already walked so that those following us will be able to continue walking them and building upon firmer changes.

In the think tank we worked together from our similarities, but even more challenging was working on our differences because when discussing topics with people who come from different walks of life and hold different beliefs we get to see a greater perspective. Working side by side with our Central American counterparts was an enriching experience where we built up knowledge: our regional meeting tied together lots of research and prior work to build a Youth Work Policy guideline, made by youth that is now being studied by the Minister of Employment in Costa Rica. Similar documents are being drawn up by young leaders in different countries across Central America to make sure that youth have access to decent work that respects their rights. And similar policies and actions on topics such as regional energy and climate policies, new governance and democracy, gender equality and regional security have also emerged from the networked efforts of young agents of change in Central America.

Let everybody participate equally. Collaborate beyond borders and disciplines. Take responsibility not only for ourselves, but for others too. Inclusiveness, not exclusiveness. Long-term thinking not short-term solutions. Connectivity. And Integrity – let quality not power control! – The Greater WE

When everybody is included, there is diversity. We can all be represented. And let’s not just have a token “young” person on these committees. Youth come in all shapes, colors, sizes and backgrounds. We are interested in different things. We are women and men and the gender benders that don’t fit in either category. We are minorities and disabled. We are rich and poor. But in all of our differences, we share something in common with youth everywhere across the globe: we struggle for greater representation in our government. And we desperately want to be taken seriously and not have our protests and words brushed off as senseless rebellion.

To get youth involved in global governance, we first have to get them more involved in local governance. Help youth pave the paths of social change they’ve been making and give them official backing. Imagine how far they can take their activism to actually move the needle and make change stick when they don’t need to work against the system but with it. It’s great when a young person ensures that their workplace won’t discriminate women or the disabled. But it’s even better when they help make it a national policy so that the same struggle doesn’t have to be fought in every single workplace. And it would be amazing if their efforts were replicated throughout the region.

Last night in Costa Rica, Jorge Melguizo, one of the masterminds behind the transformation of one of the most violent cities on the planet, Medellin in Colombia, talked about how through culture and art they managed to change the face of the city into one that doesn’t take the road of violence, but of peaceful coexistence. One of the keys he mentioned for making change stick was for people in government to open their eyes and ears and see how the people in the communities are already fighting against the violence through peaceful and artistic resistance. What the city did was give them better tools and support so that the youth and women in the communities could continue to bring about change. The government didn’t need to impose solutions; the solutions were already being invented and applied by people in the communities. I would apply this same philosophy to youth participation in global governance: youth are already participating so help them do it more efficiently and back them up.

Getting youth involved in global governance is no guarantee that it will be an easier process. But it does promise to deliver better results. Simply because whatever solutions come from this discussion they will include the voices of the 50% of the global population previously pushed to the side.