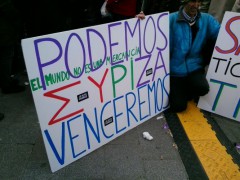 In an historic journey , the leftist coalition Syriza has won the Greek elections on January 25th.

For the first time,  since the extinct Italian Communist Party’s  defeat by the Christian Democracy Party in the 70s, a party located on the Left of Social Democracy, in terms of political spectrum,  won the national elections in Europe.

Gathered at Syriza’s marquee, Greek supporters celebrated , while mingling with members of European leftist parties also looking forward for the wind of change to blow across the EU.

Members of Die Linke (Germany), Green Party , Left Unity, Trade Unions and Socialist Coalition (UK),  Sinn Féin and Anti-Austerity Alliance the Socialist Party (Ireland), IU and Podemos (Spain) were  in the merry atmosphere as they envisioned a similar outcome in their countries.

Syriza’s victory stretches far beyond the achievement of a political laboratory. It is a turning point that brings on a more in-depth debate over the friction between supranational technocracy and national democracy, not only related to Troika interference in Greece’s government but to TTIP, the gloomy trade UE-USA treaty that a “Syriza-led Greek parliament will never ratify”.

Furthermore, Syriza victory  opens a new political page for fringe parties opposing austerity measures both on left-wing and on right-wing sides of the political spectrum.

Regarding the former, in Ireland the republican Sinn Féin and the socialist Anti-Austerity Alliance are jointly calling Irish voters to fight a similar breakthrough while are firmly supporting Syriza’s call for debt conference.

Small far-left parties such as Portuguese Communist Party and the Left Bloc, and a handful of new civic groups including a Portuguese version of Spanish Podemos are leading the way against budgetary cuts and privatizations in Portugal, on the road towards the elections in the Lusitan country that will be held in 2016

However ,  the Portuguese Socialist Party  is the one which  is currently gaining the citizenship backing, according to recent surveys.  Astonishingly, extreme-right-wing parties such as French National Front or Italian Northern League have welcomed Greek results as “the opening of the trial of euro-austerity” as Marine Le Pen described.

But the first round is going to take place in Spain. The country will face throughout 2015 four exciting elections days in a row,  especially since Podemos bursts onto the political scene.

In contrast to this latter, Syriza is not a newcomer , since it was on the brink of winning the previous national elections (2011).Unfortunately both huge inner and international pressure on Greek electors made it second-best.

From then on the coalition has been waiting for its opportunity,  while gaining experience in local government, especially in the region of Attica. On the other hand , Podemos was born a few months before the past European Parliament elections in May 2014 , without any ruling experience to back its project. Thus things are not crystal clear in Spain regarding elections because the political outlook appears to be very open and fragmented.

However ,  Pablo Iglesias’ party main goal has consisted in blowing up the political scenario in Spain. The two party system is a common denominator in neighbouring democracies where conservatives and social democrats take power in an alternation process , showing in public an image of alternative.

However ,a growing majority of the electorate has  been increasingly considered this feature as a political alternation rather than a diverse electoral choice. Among big European parties , the social democratic ones are the most affected by this loss of credibility , since their most recognizable hallmarks have been diluted in very conservative-style decisions.

Financial collapse and their consequences  have just accelerated the process,  such as François Hollande (France) or Matteo Renzi (Italy) are experiencing during theirs terms of office.

In the case of Spain where the Spanish Socialist Party (PSOE) and the People`s Party (PP) have been ruling alternatively since 1978’s Transition to Democracy, the search for alternative was brewing for years until it finally exploded in the 15M movement and its Indignados.

Podemos means the crystallization of those civic groups working behind the scenes as well of those being in the spotlight. People involved in the defence of public services, the right to housing or feminism are part of Podemos’ tissue.

Nevertheless if we listen attentively to Podemos’s speech it reminds of that exciting early PSOE from the 80s , but with the addition of social networks dynamics and their democratizing means to the blend.

In fact Podemos targets socialist voters and their political imaginary as well as floating and swing voters to make the most of the crisis hitting social democrats all over Europe , save for Portugal. Besides that the combination of a resounding social-democratic message plus the ambiguity or the lack of definition where the axis left-wing/right-wing has been replaced by up/down (“we are neither left-wing nor right-wing; we are those on the bottom against those on the top”) is allowing Podemos to wide its voters scope, appealing those who have traditionally voted to PSOE (22.89%) but also those who did it to PP (20.8%).

Or as Pablo Iglesias puts it : “Do we want to be the left-wing of do we want to win the elections?” that matches to the idea of “growing centrality” posed by the firstly Marxist and afterwards Peronist philosopher Ernesto Laclau.

In this sense Jean Luc Melenchon, leader of the French Front Gauche, has stated that attracting middle-class votes is basic for left-wing survival as also experts in Politics acknowledge.

Anyway what this new party is doing is boiling it down to a political duel with the People’s Party leaving the PSOE aside in a new-coined bipartisanship as the best way to power. Equally the People’s Party has declared Podemos public enemy, aiming this way to recover its disenchanted voters.

The People’s Party feels comfortable in moving in the terms of stereotypes, discrediting and demagoguery and  has labelled Podemos as “totalitarian”, “anti-democratic”, “terrorism-friendly”, “Chavist” or “Bolivarian”.

By pursuing this strategy,  the PPE is really reinforcing Podemos’ one and reducing the political arena to a “game of two” , from where the PSOE is being constantly expelled.

Those questioning Podemos’ strategy speak out against the absence of concrete measures whilst highlight its abuse of political marketing and a hint of demagoguery.

A good sample of this has been represented by the March of Change (La Marcha del Cambio) held on February 2  in Madrid that gathered thousands of people (300.000 according to the organization). This was supposed to be more a parade , rather  than a political demonstration because there was no demand in the air.

The March was aimed at showing  the Party’s strength , a risky bet with an incredibly successful happy-ending that has left its rivals out of place.

Neither the comparison to the 1922 fascist March on Rome , nor the radical-anti-system-left-wing-party-seeking-street-agitation label used by conservatives has worked in portraying the March of Change.

People marched under Madrid’s brilliant blue-sky,  smiling and dreaming of the change to come.