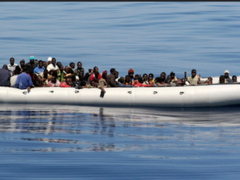 A ‘smuggler’ Vessel on the Mediterranean
CC BY AT 2.0 photo courtesy of the No Border Network on Flickr

For almost a decade now, since the 2005 Ceuta massacre first brought the issue to the public’s attention, ink has flowed by the barrel-full on the topic of the Mediterranean as a space of migration. Scientific articles, newspaper columns, policy documents and white papers, ever a few dozen books have been written on the subject of Europe’s southern border policy. Almost all have hazarded a recommendation or a critique. And yet, ten years later we are still seeing bodies washed up on Europe’s southern shores and ever-taller fences bordering off the Spanish exclaves of Ceuta and Melilla.
Still more is written today. There have been broad condemnations of governments, ‘smugglers’ and the migrants themselves, pledges and pleas. But very little by the way of facts. The facts, unfortunately are as simple as they are depressing. So simple, in fact that they can be expressed without the medium of words.
This is an award winning photo from 2004, this (trigger warning: death) is one from 2014. This (trigger warning: death) is a photo from 2005, this one is from 2006, this one is from 2014. These are (trigger warning: death) from last week. These photos show us a status quo, an european status quo that has been toeing the line of the Dublin 3 protocols and the so called common immigration policy for the better part of a decade. They are also showing us the Europeanist doublespeak embodied in the concept of the ‘humanitarian border’ failing spectacularly.
The facts are that our policies are often devised by politicians, and thus have a performative facet to them. They’re supposed to present a strong response but with a ‘kind heart’. They’re supposed to divide the flow of poor, easily exploitable people that Europe so sorely needs (but has to pretend not to) into ‘victims’ and ‘traffickers’, despite the fact that the ‘trafficker’ is often just another migrant with a wobbly grasp of navigation and a satellite phone.

Migrants rescued at sea
CC BY AT 2.0 photo courtesy of the No Border Network on Flickr

European policies revolve around the growth of the border patrol sector: More fences, more ships, more outsourcing of enforcement to countries with spotty human rights records or to the industrialisation of aid.”Send them money there so they don’t come here”. Both policies fail spectacularly.
Border enforcement has been shown to lead to the professionalisation and criminalisation of the ‘smuggler’ sector as well as higher risks and precarity amidst migrants. The ‘illegal’ migrant is now robbed by bandits, abandoned by smugglers or turned into a ‘smuggler’ himself. On the off-chance that he reaches his intended destination he is often trapped in a transnational debt to the creditors of his adventure.
The aid paradigm is equally flawed as one of the foremost theorists of migration proves himself. More money does not equal less migration it means more. Migration is the privilege of the rich or the indebted. The people who risk life and limb to find a better life in Europe are often amidst the brightest in their communities and spend extended family or borrowed money in hopes of getting a return on their investment in Europe. Throwing money at the migration problem will not fix it.
So what will? How do we solve the migration crisis of the Mediterranean without fences, boats and enforcement outsourcing. There is no straightforward answer, neither from me or proper scholars on the subject but perhaps there is the beginning of one in changing our views of ‘self’ and ‘other’ and pushing for a more equitable but still competitive economy. More on that later.
For now, after Twitter breaks the news, after the broadsheets have published their stories, analyses and angry editorials, after even the tabloids have milked the story dry, all that is left is the guilty silence or, even worse, confused mumblings of status-quo policymakers. That and the pictures of the dead.