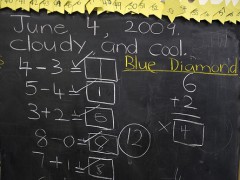 One of the arguments in the Learning Our Lesson article is that private institutions do not take responsibility for the welfare of society although they are a part of it. All blame and responsibility is directed at ‘governments’ while private institutions are soaking up money and contributing a bare minimum to society in return. I would like to argue here that this may not necessarily be the case everywhere and that the argument put forward is a huge generalisation. I would like to bring in an example of, one of the best socially responsible institutions, the COMSATS Institute of Information Technology (CIIT) of Pakistan – a model that in my opinion contradicts the view put forward by Amaya and Blanca.

CIIT is a university which plays a key role in social welfare with a contribution that extends beyond the horizons of education. Take, for example, the university’s collaboration with the Home Sweet Home project of Pakistan Bait-ul-Maal (PBM) for adopting children orphaned by massive floods,  terrorist and counter-terrorism activities or by poverty and the malaise of child labour. The institution has pledged to support the education and  livelihood of 100 children every year. It will provide for fourteen years of education/sustenance for every child and also intends to build a complete block on campus for the accommodation of these children in the near future.

This institution doesn’t only produce skilled workers like all other institutes, it also creates opportunities to support the professional careers of its graduates. The recently held Pak-China business forum is a very good example of such endeavours. The Pak-China business forum was intended to create opportunities for industrialists of both countries to initiate joint projects which would also create new jobs and strengthen the already close ties between Pakistan and China, and make it possible for Pakistan to come under the framework defined by China where the relationship is on the basis of equality and mutual co-operation rather than that of superior/inferior. It is a matter of immense pride for the people of Pakistan when private institutions reflect on and actively work for the promotion of welfare in Pakistani society.

Yet not only this: this institution also envisions the future of education not only at national level but at international level too. The recent VC forum on “Higher Education in the Islamic World: Challenges and Opportunities” – where the vice chancellors of universities from almost  all Muslim countries joined hands, was an attempt to deliberate on the challenges that the Islamic world currently faces and chalk out a plan to think about and implement the strategies needed to address these issues through higher education. I believe that for Pakistan it is a highly commendable achievement when such an initiative comes from a private institution as opposed to a government body. And it reminds me of the endeavours of Shah Faisal and Zulfiqar Bhutto in the OIC to develop solidarity in Muslim countries.

There is no denying that the fees of CIIT are higher than those of government institutes; nevertheless, the establishment of 7 campuses across Pakistan over a period of 12 years reflects its commitment to educate and train the youth – the future – of Pakistan. Above all, its intellectual and business forums are contributing to society at many levels – financial, social, intellectual, and educational.

In conclusion, it is not hard to see through this example that private institutions also strongly feel socially and economically responsible for the country and will continue to contribute to the welfare of Pakistani society through more such innovative, important and constructive endeavours.