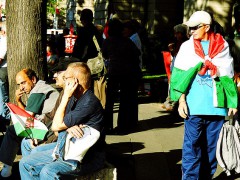 Disillusionment with an increasingly interconnected global economic and political system has pushed many Hungarians to support the political far-right in recent years. As such, the rise of the far-right in Hungary and Central Europe as a whole can be fitted into a broader European context. However, if outsiders want to understand the spectacular success of movements like Jobbik (the biggest Hungarian far-right party with the third most seats in parliament), they need to take into account the unique historical trajectory of a country like Hungary

Globalization has led to blurring of borders and the growing interdependence of national economies. This in turn causes uncertainties in those people who feel defenceless against global economic powers and trends they and their elected governments cannot fully control anymore. The job you are doing today can land in India or China at any time. Moreover, in Hungary the expected upward mobility for the losers of the post-communist economic transformation of the 1990s, has turned out to be only cloud cuckoo land that failed to materialize even after Hungary joined the EU in 2004.

Ideas of the far-right is increasingly attractive for those who lost their social standing since Hungary stepped on the capitalist path.
An image by habeebee on Flickr- CC BY-NC-SA 2.0

Some analysts blame the rise of the far-right on the failure of social democratic parties, which abandoned their classic values and became increasingly dependent on the corporate sector to boost economic growth and thus social mobility. They claim that by abandoning their traditional supporters, social democrats have created an empty space in politics which  far-right parties could step into and fill. Another problem in Hungary is that the Socialist Party grew out of the former Communist party of the pre-1989 era. During their last eight years in power, socialist-led governments failed to introduce much needed reform, which partly led to the country’s hardships after the crises hit in 2008. This difficult heritage, paired up with major corruption scandals during their period in office, has generated mass disillusionment in leftist ideas.

This means, for instance, that in Hungary you won’t see anti-globalist demonstrations like the ones in London or Toronto. Because of the country’s communist past, any ideas of the “extreme-left” do not enjoy much popular support. Indeed, in this part of Europe radical leftists are an endangered species. Being one is considered soooo uncool. Sadly, the radical right is still not considered as uncool by many young Hungarians. On the contrary, according to recent opinion polls, Jobbik is getting increasingly popular among young people, while it is also taking on some anti-globalist ideas and slogans of the left.

Young supporters of Jobbik, the ever more popular far-right party among young Hungarians.
An image by Paul Appleyard on Flickr- CC BY-NC-SA 2.0

Our communist heritage is a further burden. During the years of communist rule and soviet occupation there was no real social debate on the notorious role played by the Hungarian right and far-right, one that made Hungary the last ally of Nazi Germany. Given the lack of free speech and thought, society had no chance to come to terms with the sins of the past and purge itself of the ideas that put Hungary on the wrong side of history in World War II. The problem is that many Hungarians still do not understand that the country’s economy has become so open and so deeply integrated into global business that decoupling would plunge the country into total economic meltdown. With the chronic lack of debate on this issue, for the time being the far-right seems able to profit from the country’s defencelessness in a global economic environment.

Finally, in times of economic crisis, extreme political movements always enjoy a surge in popularity. With an impotent political left, there is a real danger that the far-right might try to position itself as the only viable alternative to the threat of economic globalization.

To buck this trend, we need serious social debate on issues like the place of Hungary in Europe and the kind of global alliances it should make. Put plainly, we need debate on where we come from and where we want to belong. But in the current political and economic climate such wide-ranging and cool-headed social debate is still a depressingly long way off.