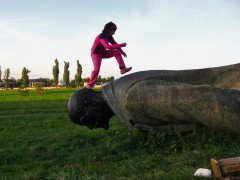 Once presiding over a major square in Bucharest, Lenin’s statue is now consigned to the city’s outskirts with a new lease of life as an adventure playground for kids. Photo by Antoaneta on Flickr CC BY-NC-ND 2.0

There’s an old Communist-era joke that neatly sums up the way most Romanians think about the relationship between the state and the individual. It hinges on a play on words so is not so easy to translate into English: “Știi bancul cu Statuia? Statu’ ia tot.” (Do you know the Statue Joke? The State takes everything). While definitely not the best example of anti-Communist humour – Romania itself is quite famous for its prodigious number of subversive jokes – it sums up quite well the general sentiment of the citizen-state relationship for the majority of Romanians today.

To say that most Romanians follow a statist approach in their relationship with the government is an understatement.  “Blessed” with a higher than average number of pensioners and people living on state benefits, and with a workforce both skilled and unskilled slowly migrating towards sunnier shores and bigger paychecks, Romania is on a slow downward spiral to insolvency. As noted elsewhere, there is a  ‘state should give me’ entitlement mentality driving this looming fiscal crisis that exacerbates the already widespread problems of social security schemes destined to be foiled by changing demographics.

But Romania has another problem, one more closely related to the ‘state takes everything’ idea so neatly encapsulated by the Statue Joke – the problem of collecting taxes. The same statist paradigm that makes people expect the state to give them benefits makes the uniquely anarcho-capitalist Romanian businessman expect the state to tax him unfairly (i.e. “take everything”). So what does the enterprising Romanian businessman do? He becomes a tax dodger.

Romania has a terrible record with tax collection and it is still trying to tax itself out of a hole. The issue is a legacy of the weak corrupt Romanian state of the early to mid 1990s. The corrupt transition years made it clear to a new class of entrepreneurs that you could get rich while not paying taxes provided you knew the right people. It became so prevalent, even at high levels, that it became known as ‘capitalism de cumetrie’ – ‘crony capitalism’. This type of mentality has thrived even in recent years and has spread from a hard core of unscrupulous pseudo-businessmen to a wide swathe of small business owners who don’t see the point of paying their often crushing taxes, secure in the knowledge that the ‘State takes’ a significant slice of the pie for itself in the form of organized theft.

To be fair, the state itself is to blame for the failure to collect, rather than any principled opposition to taxes by the entrepreneur class. The heavy-handed, if ineffective, approach to taxation that the state has always employed, coupled with the ridiculous tax burden placed on any would-be employer that has driven a significant number of jobs ‘underground’, and the general inefficiency of the state in most of its public endeavours have made most Romanians deeply distrustful of government. Bloated, slow and ineffective, it seems like the state serves next to no purpose except to hinder the enterprising young capitalist. So why should he cede it a ridiculously large cut of his profits – especially when it can’t really enforce collection?

For a growing number of Romanians ‘the state should give us’ mentality is being replaced by a ‘what has the state ever done for me?’ skepticism. Here’s a recent example: a would-be land baron/ local politician posted a rather big not to say chauvinist advert for a secretary. In it he stated quite candidly that he intended to hire the applicant illegally because he ‘doesn’t believe in giving the state more money than he can’. Now this was an elected official being quite outspoken on Romania’s biggest job recruitment website, not some shady pub owner trying to hire a part-time bartender in a back alley.

With more people asking for state money and less people willing to give, it’s clear that in Romania at least the welfare state is dead. Sustained only by loans and promises, the Romanian pension and benefit system is an unsustainable burden that needs to be replaced by a new model. The only question is which kind of model? A Randian minimalist state would spell disaster for the majority of the population, no matter what a growing libertarian minority in Romania might claim. A balance has to be struck somewhere between neglect and bankruptcy. Yet one thing is certain: you can’t run a functional society while most of your citizens think of the state as a ‘taker’ and try to cheat it.

Romanians desperately need a new model, a balance between raw rabid capitalism and the soft utopian undertones of the classic welfare state, and we need it fast. Otherwise, when there’s nobody left to ‘take’ from and everybody is holding out their hand, the statue joke might be on us.