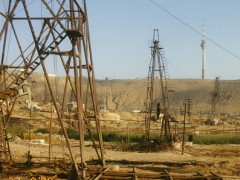 “Oil is a major wealth of Azerbaijan which belongs not only to this generation, but also to future generations,” according to the former President of the Republic of Azerbaijan, Heydar Aliyev on the website of the State Oil Fund of Azerbaijan (SOFAZ). This organisation was established in 1999 to manage the wealth created by the small petro-state in the Caucus region, home to only nine million people. The economic reforms that the Republic of Azerbaijan has undergone have won it praise from international organisations and progress which has outpaced changes in the domestic political sphere. In pursiot of equitable distribution of national resource wealth, Azerbaijan was the first country to fully comply with the Extractive Industries Transparency Initiative (EITI).

However, the degree to which the economy of this former Soviet state benefits from oil and gas revenues, which amount to 60% of GDP, is both a blessing and a curse. Two thirds of the country is rich in natural resources, leading to the rapid growth in the energy export sector. However, the consequent strengthening of Azerbaijan’s currency has in the past led to inflation and difficulty exporting in other areas of the economy, a symptom of the “Dutch Disease” which comes as part of the resource curse described by Mario Sorgalla.

Recent economic growth, which in 2009 amounted to 9% with a slowdown to only 3.7% in 2010 due to the overall global slowdown, is hindered by widespread corruption. The response to this has been to combine governmental oversight with business initiative in SOFAZ, in order to make the most of the country’s substantial wealth from natural resources. The fund-managing body uses a mixture of political oversight and activity on foreign markets to work towards strengthening the economy for future generations.

SOFAZ is a state-owned entity which manages the wealth created by the oil and gas industries in Azerbaijan, which remains one of the most promising countries for oil and gas exploration. It manages foreign currency and other assets acquired with oil and gas revenue, profiting from use of the revenues on major stock exchanges in the West, as well as investing in government bonds, corporate bonds and mortgage-backed securities. As of August, 2010, the fund claims to consist of $18.1 billion

The vital elements are not only its business effectiveness but also its political oversight. Two of the seven board members who oversee SOFAZ are drawn from the Milli Majilis, Azerbaijan’s elected Parliament. SOFAZ also cooperates with Civil Society Organisations (CSOs) to spend a proportion of its money in beneficial ways.

However, it is hard to create such an organisation with effective, rather than nominal, political accountability. Azerbaijan is beset by corruption, which endangers its long-term economic growth and reflects the inadequate political system.

The two Parliamentarians who sit on the board of SOFAZ are appointed by the Speaker of the Majilis, rather than being elected from amongst the chamber. Moreover the basis on which the democratic body is elected does not inspire confidence: recent elections in 2010 saw an increase of the dominance held by the ruling Yeni Azerbaijan Party (YAP), which gained 73 of 125 seats, with the remainder held by supposedly independent apparatchiks of the governments and weak opposition. The only serious rivals to the governing party lost the 8 seats held by genuine opposition figures. These concerns are exacerbated by the strict controls over candidate selection. Overall, the 2010 election was widely condemned by the international organisations that observed the election process.

Specific concerns regarding the mismanagement of SOFAZ include the use of its funds to pay pensions and raise salaries of government employees in the run-up to a presidential election, as well as favouring development in the oil and gas industry above humanitarian needs.

Despite doubts over the political oversight of SOFAZ, however, the effectiveness of its financial management seems to be sound. The credit ratings agency Fitch endorsed the management of the economy in general terms, saying, “Azerbaijan’s rating is supported by strong and sustainable economic growth, low government and external debt ratios and a large current account surplus, underpinned by rapidly rising oil and gas production.”

In concrete terms, the fund sponsors a number of beneficial programs, particularly for the significant rural poor population which exists outside of the main urban centres. For example, 34 million Azerbaijani Manat were used to improve the social condition of refugees and internally displaced individuals, with additional grants given to irrigation systems, water supply to poor areas, as well as education programs.

Other Factors of Success

It is perhaps easy to use Azerbaijan as an example of relative, if fraught, success. Other factors have been vital in the positive outcomes achieved by the economy in general and SOFAZ in particular. The strategic location of Azerbaijan and its port capital, Baku, as a transit point between Western Asia and Eastern Europe, in addition to its beneficial location on the Caspian Sea. The estimate that two thirds of the country is rich in natural resources means that vast revenues are inevitable. By comparison, the small, landlocked exclave of Azerbaijan, Nakhchivan, enjoys none of the strategic positioning or resources, and is in dire economic straights with its budget largely subsidised by Baku. While it is finding some trade links with Iran and Turkey, it cannot expect to market its resources and limited exports as effectively as mainland Azerbaijan.

It is clear that Azerbaijan’s relative success is due to vast oil and gas revenues. While the SOFAZ project has enjoyed limited success, concerns over its transparency and lack of real democratic credentials do not fully reflect the stated values of SOFAZ and the country’s political leadership. Without a more developed political system, there can be no hope of a truly accountable organisation in charge of the country’s national wealth.

Significant impetus must come from those countries which purchase the oil and gas. Their influence can set the agenda for domestic political reform and humanitarian wealth management, as well as fostering development of Civil Society on a grassroots level.

Through fostering a more democratic and effective political system, an economy such as that of Azerbaijan will grow to encompass the grand ideals of transparency and equity set out by its politicians. While organic development of such a system may occur, incentives to do so should come from purchaser states such as the United States and European Union. Soft power is the only means through which sound political and economic governance can be expedited.