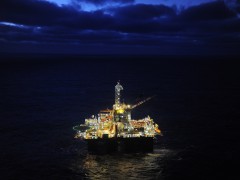 A Norwegian drilling rig in the Barents Sea. (Statoil)

While oil may be a cause of corruption and unaccountable government in many countries, Norway has been able set aside its resource  wealth to invest in the country’s future.

Norway has struck oil yet again, and each time there is a major oil discovery in Norway, the population is set to benefit. Not just the government, or the elites, but all Norwegians. Thanks to the successful implementation of a transparent system for redistributing its wealth and the country´s success in fending off the resource curse.

Norway, the sixth-largest oil exporter in the world, is an example of how to use a country´s oil-wealth to benefit the people. Norway heads the Human Development Index, which measures the well-being of people around the world. This is in part thanks to the fact that the country’s immense natural resources have been directed into the Government Pension Fund Global, previously known as the Petroleum Fund. This change of name is consistent with the idea behind the fund: To pay for the future well-being of the Norwegian people.

One would think that discovering natural resources, such as oil, would be good news for any country. Sadly, this is not always the case, many countries experience the resource curse whereby their economic development is slowed down by the discovery of oil. However, it is possible to avoid the resource curse.

Norway first discovered petroleum in the North sea in 1969 but has managed to successfully steer away from the resource-curse, by minimizing rent-seeking and corruption.

Norway has a small population and already had a functioning representative democracy with strong institutions when it discovered oil. Its political leaders were accountable to their public and largely free of corruption. This gave Norway a unique starting point, and with all this in place, it has managed to distribute its oil wealth to its citizens. Norway taxes both its oil earnings and its citizens heavily.

In some countries, oil revenue is so high that citizens are not taxed at all, reducing the need for the government to receive their approval to maintain the state and breaking any link between taxation and representation.

Through investing in the name of future generations the state has been able to absorb 80% of the resource rent, that is the difference between the cost of extracting and producing the oil and the price at which it can be sold. The Government Pension Fund Global collects the net cash flow from petroleum activities and the return on its investments, this money is then used to finance the government’s fiscal deficit.

In 2006, the fund was at $300 billion, or $65,000 per Norwegian. This money is managed by Norges Bank, under regulations from the Norwegian Ministry of Finance. It invests exclusively abroad to promote exchange rate stability, and to shield the Norwegian economy from the effects of oil-price fluctuations.

The fund does not operate purely on profit-seeking grounds, although it is expected to turn a profit so future generations may also benefit. Since 2004, it also abides by ethical guidelines and encourages companies it invests in to stop any unethical practises, and when this approach is ineffective, it excludes companies from the fund. The Canadian company POTASH, and US company FMC have been excluded from the fund’s investment portfolio based on unethical practices. PetroChina was also considered for exclusion because it is a subsidiary of the China National Petroleum Corporation which is involved in activities in Burma which are considered unethical. However, since PetroChina is considered a distinct company, it is still on the Pension Funds portfolio.

The Norwegian government has successfully avoided the resource curse, taken a long-term view on dealing with its natural resource wealth and shared this wealth with its people. Developing countries that have recently struck oil may find it difficult to implement similar policies as Norway has unless they are willing to leave the oil in the ground until their governments are fully capable to handle the wealth, which is unlikely. However, Norway can particularly serve as a an example for other oil-rich developed countries, such as the U.S. and Canada, of saving for the public rather than short-term spending and private profit.