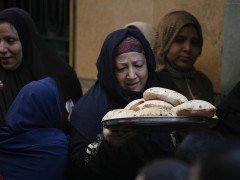 An Egyptian woman carrying bread from the bakery to her home for family. Credit: Nasser Nouri. (CC BY-NC-SA 2.0)

Bella Abzug, a late feminist activist and American politician is famously quoted as having stated, regarding the equality of men and women in the workplace: “The test of whether or not you can hold a job should not be in the arrangement of your chromosomes”.

I personally agree 100%. And it should honestly make everyone think. As obvious (to me at least) as the message of the above quote may be, gender inequality in the workplace remains to be a worldwide trending topic (to utilize the modern Twitter language) where female employment, promotions, raises, workplace rights, are all debated and subject to considerable controversies and challenges.

Why is this the case in a world where empowering women is obviously a solution to social and economic issues?

It would definitely showcase an improvement in society to respect and fulfill the demands of women and providing them with more rights and opportunities; and it would considerably improve the economy. A win-win if you will.

It is also the case for the Middle East, more specifically in Egypt, where women account for almost 22% of the workforce. This is a great number. But what’s even more striking is that women represent 50% of the Egyptian population.

There’s an Egyptian saying which states: “The woman is half of society”, which I would interpret as a way of saying women and men are complementary in developing the society in all its aspects, even though some people choose to interpret it as a pure demographical piece of data.

According to recent studies, if you are a woman in Egypt, you are three times more likely to be hit with unemployment than a man. This definitely contradicts the essence of the saying I just stated.

But simply reading statistics is not sufficient to genuinely understand the struggle women are undergoing in Egypt, in a context where women’s rights are not necessarily on top of the socio-political agenda and gender inequality is embedded in the culture and society.

And the latter has been the case for a very long time, as far as most of the Egyptian society can remember. There needs to be considerable improvement on many levels, and this idea of win-win can be an incentive (even though it should not be, as women should be granted their rights regardless of anything) for Egypt’s society and economy, and for the Egyptian government and policymakers to truly reflect the needs of their people and show more commitment to human rights and equality.

In my humble opinion, what needs to be done in Egypt is the following:

1. Improving the status of women in society through societal and political participation, harshly condemn through legislation, media, and awareness any acts of sexual harassment, violence against women, and discrimination in the workforce, etc…

As simplistic as it may seem, those two dimensions require lots of effort and political will, and they are a blend of short term/long term endeavours on the socio-political and cultural levels; although the main transformation and paradigm shift should occur on the educational level (through schooling and country-wide campaigns), to transform the Egyptian mindset from the “traditional” role of women into viewing women as an equal and integral part of society.

But all these considerations will lead to the win-win situation I have been very fondly mentioning throughout this article.

Let me leave you with my personal conclusion and an interesting piece of information. In Egypt just as in any other area of the world, there should be no debate that no distinction can be made between a man and a woman, on all levels including the workplace.

Feminist groups and NGOs in Egypt and the world have constantly advocated for full equality between genders. In Egypt, where “the woman is half of society”, this should go on top of the agenda. Finally, my interesting piece of information is quoted from a research undertaken by Strategy& in “Empowering the Third Billion: Women and the World of Work 2012” (pdf link):

A more integrated society and a 34% growth in GDP. The win-win is clear in Egypt’s case. It can and it will be done.

Currently a graduate Student at the American University in Cairo, studying Public Policy. Dual Citizen, born in Egypt and have lived in France most of my life. Passionate about politics and hoping to see one day Egypt become the best country in the world and a role model for freedom, development and respect of human rights. I believe that humans were born to help each other, and it starts with sharing information and ideas, which I will attempt to do as much as I can through this platform.