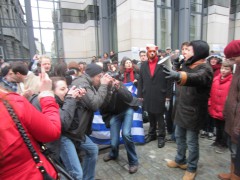 Protests under the slogan “We are all Greeks” were held across Europe on Saturday against the new bailout-austerity package for Greece. If the organizers’ Tumblr page had some impressive pictures, in the European Union’s de facto capital of Brussels the event was somewhat lackluster, gathering perhaps seventy-odd people, who were overwhelming Greek or Belgians of Greek descent.

It isn’t as if the point was inconsequential. As Greek war hero Manolis Glezos explained to the Observer: “It started here but will move to other states. That’s why we’re seeing this solidarity because people are reacting.” Eurozone government debt began decreasing last year but with the return of recession with the winter, many countries again face rising deficits and even debt crises. This in part motivated the European Commission, the EU’s executive, to single out 8 euro countries – including Greece, France, Spain and Italy – for “macro-economic imbalances”. If they do not remedy the situation up to the Commission’s standards, they could be liable to fines and other sanctions.

Greece, though its budgetary disaster is exceptional, is not alone in facing the threat of seeing outsiders’ budget preferences forced upon them, in large part because of the failed economic management of EU leaders and of the European Central Bank.

Gathered in front of the Greek Embassy.

The protest, if marginal in itself, showcased a  microcosm of European politics and its challenges. First of all by its languages, as the speakers addressed the crowd in French, Greek and Dutch. If there was some dynamism in the first two, that was lost as the last required a bemused interpreter to repeat each sentence. Momentum and engagement fizzled much as it does in the European Parliament when debates are made stiff by mediation into 22 other languages.

And linked to language was the national question. As one speaker railed against the Greek Government and police for ruining the country, one man shouted “And also by the Germans!” He then paused before adding “Pardon, by German policy!” Greek and German media have been savaging each other with clichés of lazy Southerners and caricatures of swastika-laden Teutons for months.

The very fact that most in attendance were personally connected to Greece in some way illustrated the difficulty in engaging the public to care about the troubles of other nations, even when these troubles are directly linked to developments in one’s own country.

There was also division among the protesters with some young firebrands loudly arguing with the head of the Belgian Greek Community. Should government officials be allowed to participate in the protest? Should the unelected EU-backed Government fall and the bailout-austerity package rejected wholesale? On these points there was no consensus. “You are with the Government or with us!”“There are some things that have to change. That’s what you don’t understand!” In light of the  violent police action and chaos of last week’s protests against the Greek Parliament’s approval of the last round of cuts and reforms, each found their arguments: the ones for the fundamental illegitimacy of the Government, the others calling for “harmony”.

As a large SUV drives by a man shouts “We’re paying for those ones!”

There were some concrete statements about the fundamentals of European economic policymaking: the troubling fact that so many former Goldman Sachs men are now in the highest offices of Europe, including the Prime Ministers of Italy and Greece and the President of the ECB or the ECB’s policy of lending at rock-bottom rates to European banks but not governments. Unlike the straight “Occupy” protests however, there was no for formal debating time.

As Brussels’ eternal drizzle and the cold began to be felt, those gathered split apart, having done their part to voice the dismay in Greece. They may not have had the answers but as the EU’s economic program plainly fails and Greece continues to suffer the worst economic depression since the collapse of the Soviet Union – one participant called it “Third Worldization” – the pan-EU protest should highlight at least one thing: The national ministers and “expert” Eurocrats are doing something wrong and it will take more than Greeks to help set things right.