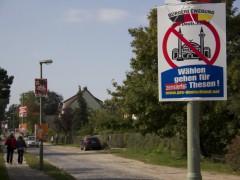 Support for far right parties in Western Europe first became tangible at the end of the 1970s. This trend grew ever-stronger due to the rise of globalization and the consequent weakening of nation states. This, paired up with a disillusionment from the conventional political left and right made the comeback of far right movements possible in these countries as an alternative to the political mainstream. After the fall of communist regimes in Central Europe, far right parties quickly re-emerged thanks to the fact that regime change did not bring along the much-anticipated quick rise in living standards.

Political slogans against Muslims are now common place all over Europe.  An image by Adam Lederer on Flickr – CC BY-NC-SA 2.0

The classic tool of far right movements has been to create a scapegoat, an Other, against whom they could build up a political strategy. In this sense, what Islam and Muslim Immigrants are for Western European far right parties, the Roma minority is for Jobbik, the most popular Hungarian far right party and now the second biggest party in the Hungarian Parliament.

In this light, differences in attitudes towards Islam and Muslims regarding Jobbik and other Western European far right parties become more tangible. As I mentioned above, Western European far right parties tend to stand on a platform that regards Islam as a potentially hostile religion and look at Muslims with suspicion. Muslims are the obvious targets for these far right movements: newcomers, large in numbers, living in relative poverty in the ‘ghettos’ of big cities. Far right movements now more than ever can claim that immigrants, Muslims in particular, present not only a security threat to these countries, but they also put a burden on welfare services, putting the much cherished welfare state in jeopardy (despite clear evidence to the contrary). Indeed, what far right politicians like doing is to connect the problems linked to immigration and Muslims minority politics. In this way, they are able to address those people who are disillusioned from leftist policies and globalization.

Living together in harmony can sometimes be harder than hating each other. An image by rUssEll shAw hIggs on Flickr – CC BY-NC-SA 2.0

Hungary is a different case, due the to relatively low number of Muslims living there. The negative image of Muslims therefore is not wide-spread among the Hungarian far-right. Consequently, the Jobbik party is using Islam in a totally different way. Since the ‘Other’ for Jobbik is the Hungarian gypsy minority, Islam tend to have a rather positive place in Jobbik’s universe. Gábor Vona, leader of Jobbik described Islam as the last bastion in the fight against globalisation[HU]. So unlike the Hungarian society, Islam, in Vona’s views, still holds out in the fight against global capitalism. Jobbik also used Islam to support the anti-Zionist propaganda that the party uses to cover its anti-Semitic attitude. In a rather grotesque move Jobbik organised the Day of Hungarian and Arab Friendship on September 11th 2010. The organisers’ only problem was that hardly any Arabs and Muslims turned up on the event. Nevertheless, by positioning Islam as a bastion in the fight against Western global capitalism and Muslims as people opposed to Israel, Jobbik also tries to hit a chord with its electorate and those who had enough of globalisation and increasingly market friendly leftist policies.

Muslims are used by far-right parties in the battle for votes all over Europe. Yet the question remains. Will this unwanted attention towards Muslims and Islam from far right parties help Muslims and the rest of the society live in peace and harmony, or will it only serve those who profit from social conflicts?