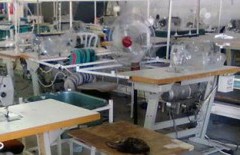 A factory in Gaza. Photo by Mohammed AL-Madhoun. Used with permission

Last month, I asked a friend to buy me made-in-Palestine T-shirts. She sent me three T-shirts with paintings that unmistakably showed they were made in Palestine. I am not the only one who does this; many Palestinians do it not only out of patriotic pride but for solid economic reasons as well. It’s many individual acts like these that support the vulnerable Palestinian economy and its entrepreneurs who have lost a great deal as a result of the ongoing political conflict. The influx of cheap garments from China and Turkey and the Israeli clamp down on the Palestinian clothing industry has resulted in the closure of over 95% of Palestinian garment factories. Strong competition with cheap low quality imports, and the newly-developed tunnel industry in the Gaza strip have made serious inroads into legal trade. Furthermore, lack of financial backing from the government and donors has resulted in the closure of thousands of factories in the Gaza Strip and the West Bank and led to even greater unemployment.

In Palestine, there are thousands of family-owned farms and small and medium-sized enterprises (SMEs) which have little idea of how to market their products abroad. Political conflict is one of the main reasons behind such a dilemma. Many Palestinians factories used to work for Israeli companies, hiring thousands of Palestinian workers to work in the occupied Palestinian territories. This outsourcing model – which avoids the lengthy permit process for Palestinian workers who have to cross into Israel to work – is also a confidence-building measure which shows that economic exchange make can contribute towards building peace.

Fair trade is a term that has been used for many years to help developing countries gain better trading conditions. And in Palestine fair trade can be a platform for building trust and peace through shared and common goals between Palestinian traders and their counterparts in Israel and the rest of the world, especially in Europe and North America. In 2008, the oil from the Palestine Fair Trade Producers Company (PFTPC), based in the West Bank city of Jenin was the first Palestinian product to receive fair trade certification.  However, even if all the Palestinian products are certified as fair trade goods, this will still not bring about peace unless a courageous political settlement is reached. As Sarah Irving put it, “If you look at ethical trade initiatives they are driven by awareness of what Israel is doing, so these small-scale projects have a real place in addressing that. The large-scale negotiations are just talking in another world where we don’t have checkpoints and Israel controlling all the sea, land [and] air borders.” Palestinians and Israelis, alongside Europeans, can bring about change by creating a space for trust-building efforts that use the economy as an instrument. This could be through mutual relations between SMEs and their counterparts in Israel with help from the European Union or the United States. Much has already been done in this direction but still not enough to give a chance for peace talks and make the Palestinian economy independent from international aid. One good example here is the  MENA Geothermal Corporation a Palestinian company which started intensive work in the Palestinian territories with the help of the US consulate in Jerusalem. Besides their work in Palestine, MENA has also expanded into the Arab world, not only trading on Palestinian know-how but also providing green energy.

The destructive influence of aid

What do the Palestinians expect from the huge amount of aid coming from international donors and charity organizations? My father used to tell me, “Ask someone to teach you how to solve these maths problems and stop asking your sisters to solve them for you.” Sometimes I think my father was referring to this kind of aid. The more aid the Palestinians, especially those in the Gaza Strip, receive, the more they become dependent on it. A huge amount of non-humanitarian aid such as 2012 model cars was delivered to Gaza as a type of gift. Such aid sustains the dependency of the Palestinian economy and destroys newly established SMEs and family-owned businesses by enabling goods to be delivered at low prices or for free. What’s more, this also has a serious effect on peace talks as it empowers political parties like Hamas which receive such aid and distribute it to their activists.  At the same time Gaza’s de facto government imposes taxes on these goods, increasing costs and sustaining political divisions among Palestinians.

What Palestinians need is not only aid; they need to partner with those who donate to them, and improve their knowledge economy through education and skills training.  Israel, the EU, USA and the Palestinian Authority should start new initiatives to train and promote the SMEs of the  knowledge economy, and ease the way for the young generation of Palestinians by lowering the barriers for exporting their work and products.