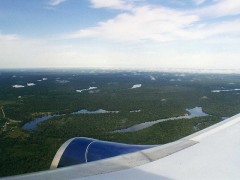 In the villages along the hundreds of rivers of the Amazon rainforest it is told that at the heart of every river or “cocha” (lagoon), lies the Yacumama or ‘mother of the waters’, a giant boa that rarely emerges because of its size, feeding only on aquatic animals. It may remain dormant for years but if disturbed, surfaces causing great destruction and devouring the animals or people who disturb its tranquility.

No matter whether this is myth or reality, the truth is that the waters in Peru are now agitated by a number of problems relating to them. The National Water Authority identified 244 social conflicts throughout the country that have their origin in water issues, either in use or access management. But that was in 2010; in 2012 other researchers estimate the number of water-related conflicts to be around 1,000.

Of these conflicts, the most representative is the Conga mining project which threatens the group of ponds and wetland areas that form the headwaters in the Andean highlands of Cajamarca. The threat is so imminent that the protest leaders organized the March for Water from Cajamarca to the capital Lima. And the problem is far from being solved.

Another factor that influences our water outlook is global warming. It has been estimated that over the last 30 years, 25% of the Andean glaciers have disappeared, with a marked negative impact on river flows and thus on the production of hydroelectrics, agriculture, grazing and even tourism. Take the Huaraz [en] region for instance, with landmarks such as the Huascaran [en] and Pastoruri snowy mountains where the number of tourists has fallen off since the snow-covered ice receded dramatically.

This disparity beomes even greater when compared with the population distribution. The Pacific slope meets the needs of the coastal region and part of the mountains; the coastal region alone is home to some 15 million people. The highlands where the slope of Titicaca is located is home to some 9 million, while the Atlantic slope covering the mountains and jungle, is home to a mere 4 million people.

One way to harness the potential of Amazonian waters is by hydroelectrics; there is room for 20 such projects along the course of the Marañon River [en] alone. and even neighboring Brazil is very interested in building a series of hydroelectric dams [en] in Amazonia. Although these projects have aroused strong opposition [en] and much criticism, negotiations are still going on at the very highest level.

The meandering rivers of the Amazon seen from near Iquitos, Loreto, Peru.

Another way to use the waters of the Amazon is through water transfer. Last year saw publication of a law declaring “the diversion project of the Marañon [en] River and the damming and diversion of the Huallaga [en] River” to be a matter “of public necessity and national interest”.  But the project generated significant controversy [en] about the unforeseen impact it could have on the ecosystem of the Amazon and was finally shelved.

There is also the problem of contamination. One good example of this is the Rimac [en] river that runs through Lima, As it descends from the mountains it receives the waters of mining companies with their high content of lead, manganese and other minerals. Urban pollution is added to rivers by industries that discharge their drains with chemical and organic effluent, as in the case of Huaycoloro, a tributary of the Rimac, which passes through San Juan de Lurigancho [en], Lima’s most populous district  with a population of one million people.

In the jungle contamination by oil companies is the main polluant. Native communities often report on oil spillages. Illegal gold dredges also contaminate the water with their waste, especially mercury.

Paradoxically, the annual rainy season usually brings mishaps rather than benefits due to “huaycos” (landslides). Such landslides and the flooding that occurs show the lack of any accurate government forecasts. And this is only exacerbated when it coincides with the El Niño [en], cyclical climate event that usually plagues the Peruvian coast.

Talking about El Niño: A prehispanic legend tells that in ancient times a mysterious king named Naylamp landed on the northern coast of Peru with his court and the statue of their god, and founded a kingdom and a dynasty. Much later one of his successors decided to relocate the divine statue. This displeased the god who sent a deluge as a punishment which lasted a whole month, causing all kinds of destruction throughout the kingdom. This was followed by a year of drought. To apease the god, the surviving priests captured the king, bound him hand and foot, and threw him as an offering into the sea. The weather returned to normal, but the kingdom had been destroyed.

The archeological remains [en] found partially confirm this myth and may be  the first historical record of El Niño on the Peruvian coast. However, perhaps the ancient wisdom left another message embedded in the legend: don’t mess with certain important things as it could have unintended consequences. Blinded by technological advances, we should be very careful to make full evaluations before making any major abrupt changes to nature that could alter the planet’s ecology.

(The photo shown in this article is from wallygroom on Flickr, and is used with a Creative Commons license: Attribution-ShareAlike 2.0 Generic (CC BY-SA 2.0)).