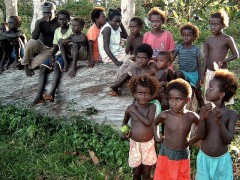 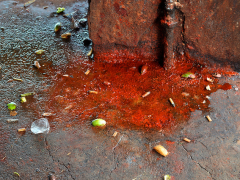 Used with permission by Peter Walters 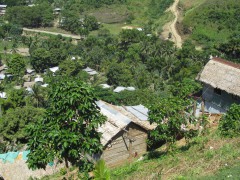 Young people in The Solomon Islands, CC BY 2.0 by luigig on Flickr

Offices, salaries and opportunity colour the imagined ideal of The City. While for a privileged few this may indeed be a reality, for many this dream ends upon arrival and the reality of job scarcity, nepotism and high rent dawns. This is particularly so in the context of Pacific Island cities, like Honiara; the fast growing capital of the Solomon Islands famous for Solbrew, betelnut and unemployment.

Primary education in the Solomon Islands has become increasingly accessible, since it became free for all students in 2009 (though, notably, not compulsory). Secondary school, however, is somewhat more difficult, requiring particular grades and sums of money beyond the means of most Islanders. Lacking its own university, the Solomons Government does however sponsor a large number of students to attend university abroad, resulting in a pool of professionals across such fields as human resources, health, governance and forestry.

Upon return to Honiara, however, these graduates face the unkind reality of job scarcity with tertiary graduated constituting many of the capital’s unemployed, in addition to the annual 7000 high school graduates searching for work.

Noteworthy, however, is the newly implemented Rapid Employment Project that provides short-term employment opportunities to Honiara’s most vulnerable groups in badly needed urban services, such as garbage collection and public sanitation (important in a town that lacks a single functional public toilet!). In addition, the programme assists participants to develop skills in financial management, literacy and workplace safety.

Most of the nation’s GDP is spent within Honiara. The remaining islands must make do with what’s left. Most villagers are forced to bury their rubbish at sea, lacking garbage disposal or recycling systems. Better investment in de-centralisation and improving services in the provinces may help provide jobs for these graduates in their own provinces, while also improving services in across the archipelago.

Interestingly, many I spoke with reflected that although ‘modern education’ provides the benefits of literacy and numeracy, it also works to disconnect young people from their subsistence lifestyles and the skills, values and family networks that sustain it. Words echoed by scholars such as Shrestha in Nepal. Back in the Solomons, the Archbishop recently called on the disenfranchised youth of Honiara to return to their villages and reconnect with their families and culture. Equally irate, Honiara’s youth are discontent with the lack of public space for youth participation and the abundance of beer and betelnut in the face of disengagement.

Like its urban cousin, village life is not to be romanticised; it can be difficult, inequitable and isolated. However, it can also be dynamic, resilient and inspired. The average villager will know precisely what is edible, what is not; how to procure, prepare and preserve it; what is dangerous, what is healing. By the tender age of six, children are already masters of bush knife – the primary survival tool of Islanders. Village homes are typically built from local hardwood timbers or entirely from sago palm. Dugouts are expertly carved from canoe trees and repaired with a naturally occurring, water-proof resin. Family networks and inter-island activity remains robust and spirituality is paramount.

Young people in The Solomon Islands, CC BY 2.0 by luigig on Flickr

A ‘micro-economy’ has developed within villages, with households not only selling their produce at local markets but expanded to in-situ canteens and phone credit sales. Solar power is making enormous in-roads in this sun-kissed nation; and Islanders have been quick to see the entrepreneurial potential, establishing phone charging services in their homes. Some villages are realising the unique beauty and ecological value of their island homes, and engaging – rather resourcefully – with eco-tourism. Moreover, across the archipelago, communities groups, most visibly of visionary women, are actively involved in filling the gaps left by government.

With an incredibly high birth-rate, Honiara can expect to grow at a similarly alarming pace unless the Government and the agencies that support it are responsive and creative. Globally, we need to be looking towards ways to further bridge informal economies with the formal, particularly supporting the innovative individuals at the grass-roots, as well as the self-organised groups working for positive change. Importantly, the dichotomy between rural and urban, traditional and modern need to be redressed and ways found to work with, not against, traditional networks, systems and knowledge.