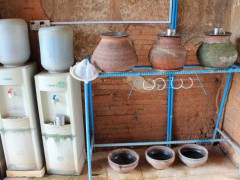 Every week, my flat mates and I purchase a 20 litres drinking water tank from the street vendors in our township in downtown Yangon. We pay 500 Kyats (about 40 Euro Cents) and get a sealed tank, which is a lot cheaper than bottled water (for which you almost pay a European price). However, the 500 Kyats tanks are made out of PVC and may not always been cleaned properly, which decreases the quality of the drinking water in the tanks. Meanwhile, local people who might only been earning 3,000 Kyats (or even less) per day, cannot afford to pay 500 Kyats for a water tank. They have to drink water of poorest quality, e.g. tap water or water from public pots which you find all over Myanmar and particularly in pagodas. But offering poor quality water to the public for free is no acting in bad faith. The difficulties are rather that water quality is not monitored according to national or international standards and further, many people do not know what effects contaminated water can have on their health.

Contaminated drinking water as well as insufficient hygiene and sanitation can provoke life-threatening diseases – diarrhoea, cholera, and many more. According to official figures from the Myanmar Ministry of Health and the World Health Organisation (WHO), around 20% of Myanmar children dying under the age of five die from diarrhoea – twice as much as global average and around the same as in Sub-Saharan Africa where water is often scarce.

Bad water quality in Myanmar is not linked to general water scarcity. As the Food and Agriculture Organisation (FAO) reports, Myanmar has the second largest amount of renewable water sources per inhabitant in Southeast Asia. It is also well known that the energy potentials of Myanmar hydropower have been discovered by international investors. But the country still has a serious water problem when it comes to quality and supply management. Insufficient sanitation measures lead to faecal contamination and bacteria in the water sources that are used for drinking and cooking. Additionally, floods during the 5-months rainy season carry sewage and fertilizer into rivers, lakes and ponds which represent essential water sources, particularly for the poor. Like in neighbouring Bangladesh, drinking water is contaminated with arsenic, which – even after the water has been boiled – can provoke cancer, brain damage and other diseases. On top of that, cyclone Nargis contaminated a large number of water sources in 2008 with salt from seawater.

A few Non-Governmental Organisations (NGOs) have started pilot projects to purify drinking water in poor communities but they are decentralised and do not have a nationwide impact. A year ago, the Myanmar government established a National Water Resource Committee (NWRC) for the protection of water resources. The mission of this committee, however, does not include the nationwide promotion of healthy drinking water.

So far, the Myanmar authorities have neither decided to follow international standards such as WHO water standards, nor to establish their own water quality standards. Dr. Khin Maung Lwin, a senior water expert and former Myanmar Ministry of Health Director, has tried for over 20 years to establish water standards in Myanmar – and was rejected all three times. “Poor people in Myanmar test the quality of their drinking water by colour and smell but they do not think about bacteria”, highlights Dr. Khin Maung Lwin.

For Adam Leddy, an Australian water professional working in Myanmar, the situation is clear: “The future of water and the development of current infrastructure in the west is mainly in part to privatisation, the development of a competitive, regulated and legislated water market. Myanmar will require technical and financial assistance to achieve policy making, and it will need private sector initiatives.”

While, in the short to mid-term perspective, privatisation may be a relatively fast solution to provide better drinking quality in Myanmar, binding water standards are still indispensable. In the long run, exclusively privatised water supply – particularly in a developing country with large income equality – might risk to become unaffordable for some people, which recently even happened in the United Kingdom.

To summarize, we observe that water quality is no current policy priority for the Myanmar Government, even though small progress has been made. However, authorities should realize that clean and well managed water could contribute to develop other policy areas prioritised by the Government at the moment, such as health and economic development or education, as it is often the root of many problems in these sectors. People get sick because of contaminated water and cannot go to work. While being sick, they cannot earn money and have to use their scarce savings for medical treatment. Meanwhile, their children, who are responsible for getting water in poor Myanmar families, regularly miss school because they have to walk long distances to arrive at a water source. All these problems could be tackled by adopting proper binding water standards in Myanmar.

Sophie is currently working as a Finance and Banking Consultant for the German Development Agency GIZ in Yangon. Before coming to Myanmar, she was working as a Microfinance Junior Consultant for the German development bank KfW in Frankfurt. Sophie loves to engage in political, cultural and globalization debates and is a graduate of Freiburg University and Sciences Po Aix-en-Provence.