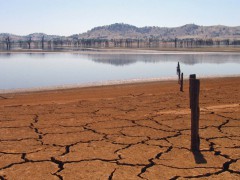 Economic-based water management strategies are assuming an increasingly important role in managing Australia’s water scarcity problems. Australia is the world’s driest inhabited continent, with at least 70% of its land area classified as arid or semi-arid. However, this country is not only confronted with limited water resources, but must also contend with uneven demand and distribution in regards to these resources. Water is relatively abundant in sparsely populated northern Australia, but is scarcer in the densely populated and urbanised south-eastern states that consume large amounts of water.

The incongruity between demand and supply has created shortages in water supply to the Southeast and, as a corollary, mismanagement of its natural water resources. This issue is exemplified by the Murray-Darling Basin, a large area situated in the interior of south-eastern Australia.

Map of the Murray-Darling Basin. Image by Martyman (Wikimedia Commons)

This sedimentary basin, which is equivalent to the size of France and Spain combined, provides more than 50% of the continent’s total water supply. It is also of significant economic importance, with the farms that utilise the Basin’s water producing an annual agricultural output of $10 billion – almost 40% of Australia’s total agricultural production.

However, the Basin is an area that is relatively dry, receiving only six percent of Australia’s total run-off. Despite this, governments and private industry have historically perceived the Basin as an unlimited water resource for domestic, agricultural and industrial purposes. As such, large volumes of water continue to be drawn from the Basin today. The promotion of unsustainable agricultural practices through extensive water abstraction has compromised the Basin’s fragile riparian ecosystems and depleted its groundwater supplies.

This situation, coupled with the Millennium Drought, increasing urbanisation and the concomitant increase in demand for water, has led the government to implement several economic-based water resource management strategies which essentially conceive water as a tradeable commodity. Reforms aimed at increasing the efficiency of water use in the Murray-Darling Basin were recently introduced in the form of water license trading schemes, whereby water access entitlements that have been allocated to irrigators can be traded within an open rural water market. Between 2009 and 2010, this market for water licenses resulted in trade valued at almost $3 billion. This scheme’s intention was to achieve a more sustainable means of water management by reallocating water access rights from lower value users to more efficient higher value producers.

However, this trading scheme has been subjected to extensive criticism, primarily due to the over-allocation of water licenses and concomitant overuse of water resources. The water supplied to these license holders is also substantially subsidised, leading to a situation in which irrigators are utilising more water than they would at full prices and are accordingly employing less efficient water use practices.

In response to these issues, the ‘Restoring the Balance in the Murray-Darling Basin Program’ was introduced. Under this water buyback program, the government purchases portfolios of water resource entitlements from irrigators for the purpose of making water available for environmental flows.

Criticism has been directed at this new market mechanism, which essentially provides considerable funds to a small group of landholders, some of whom were partly responsible for the deterioration of the Basin in the first place. However, the program has raised even greater concerns on an economic level, due to the financial burdens that it places on rural farming communities. These burdens derive principally from the reduction in water availability for irrigated agricultural practices, which impacts upon existing patterns of agricultural production and leads to an overall decrease in irrigation-intensive output. The loss of income from these activities has detrimental economic impacts on rural communities through foregone revenue and decreased employment in local primary industries. These effects are not necessarily localised, as flow-on financial consequences additionally impact upon those associated with the agricultural supply chain, most notably processing, freight and transport firms.

A dairy farm along the Murray River. Photo by Mattinbgn (Wikimedia Commons)

However, the ultimate extent of these impacts depends to a large degree on the flexibility of local economies in reallocating resources. The agriculture industry has demonstrated such adaptability in the recent past. For example, during the Millennium Drought, dairy farmers restructured their farming activities and sold redundant water supplies, the proceeds of which were used to purchase much-needed fodder. Prior to engaging in the buyback program, similar efforts should therefore be concentrated on productively redeploying resources associated with irrigated agriculture into other areas of production.

Whether the Basin program is ultimately successful in achieving its aims remains to be seen. With the projected continued growth of Australia’s population, the demand for water drawn from the Murray-Darling Basin will only increase. A significant challenge for future resource management within the Basin will therefore be to balance sustainable water use practices with the promotion of socio-economic outcomes in the context of climatic uncertainty. Only in this manner can we manage and conserve this valuable liquid asset.

Stephanie Constand is a member of Global21, a student network of international affairs magazines and a partner of FutureChallenges. A longer version of this article was first published in The Sydney Globalist.