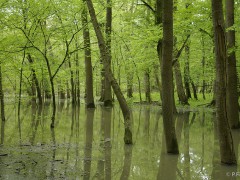 First and foremost, what solving water governance issues requires is a proper feeling for scale. As the example of Slovakia, a country particularly rich in water resources, shows, solutions that are too grand or too local can be equally costly and result in failure.

Záhorie (“the land behind mountains”), the most westerly part of Slovakia with its sandy subsoils and dunes could easily have become a true desert. Yet the common sense of the local people and rulers has prevented this from happening: in order to stop the spread of desert-like terrain, locals started to grow pine trees, the first of which can be dated back to 1650. Then, in 1770, a popular empress Maria Theresa, officially ordered the growing of pines to prevent landscape degradation.

Záhorie, however, is an exception. Slovakia is extremely rich in water resources. The south-western area between the Big and Small Danube (Žitný ostrov), where I live is the biggest river island in Europe. Its underground waters are considered to be the largest reservoir of drinking water in Central Europe. Here I can drink the tap water without any problems, a benediction not many people on earth can share.

The biggest risk for the area came about in the Socialist era when a Slovnaft refinery was built at the point where the Small Danube branches from the main river. It was constructed at a time when official decisions were not criticized or even publically discussed. Recent plans to build a new pipeline to Austria that would cross Žitný ostrov have encountered much stronger opposition.

But the worst situation is in Eastern Slovakia whose underground waters were contaminated by extensive usage of chemical fertilizers during the Socialist era. The situation has worsened with the recent flooding that affected almost every Central European country in 2010.
It’s a showcase example of how, despite numerous attempts,  both large scale and low scale solutions can prove to be inefficient.

2009 Flooding in the Zemplín region of Slovakia. Photo by Peter Fenda

Sometimes, a solution that’s too grandiose can become inefficient, even if planned with the best intentions. To help the Eastern Slovakian region, the European Union has invested in 82 kilometers of water pipelines to 21 villages. But the project is in trouble now: despite the relatively low price of connection to the waterpipe, many people still refuse to use it because to do so they need to sign a five-year contract with guaranteed  minimal consumption of 90 cubic meters per year.

Some people, especially the elderly, argue that their consumption is much lower since they’re used to buying drinking water in bottles. Another argument is that they have used local water for decades without having any problems and also that the local water never used to taste of chlorine. Others think it’s cheaper to invest in home-made solutions with prices comparable to a one year term only.

If the trend continues, local developers will need to return nearly 33 million Euros back to the sponsor.

The history of the fight against flooding is the story of another inefficient solution. Obviously, the 2010 floods were not the first time flooding happened in the history of Slovakia. During the 20th century many canals, dams and reservoirs were built. In recent years, however, it seems that the state owned Slovak water management company can’t cope with management of the infrastructure due to a lack of funding. Thus it can make only the most necessary repairs to the vast network of 32, 738 kilometers of rivers and brooks, 287 water reservoirs, 2811 kilometers of dykes and 1812 kilometers of canals that it has under its management.

To cope with the underfunding problem, Michal Kravčík, Slovak environmentalist and former leader of the ‘People and Water’ NGO, has proposed to radically cut expenditure by creating small dikes, lakes and small dams in brooks (see the case images).

The newly elected government liked the idea as it not only seemed to help contain flooding but also allowed local people to be employed on constructing the levees (see images). So far, 24 million Euros has been spent, 5 million from European funds and the rest from the government budget.

What the government decided to ignore were scientists’ opinions that proper water management needed much more wide-ranging development while Kravcik’s local-basedt solution was quite risky and not sustainable. It was also noted that his project had been accepted without proper procedures.

Radovan Kazda, an environmentalist blogger wrote that such local measures were recommended only as a supplement to conventional construction works. If prioritized, as in Kravcik’s case, they would be very expensive and would anyway fail to protect against major flooding.

These videos vividly illustrate the state of the local construction work after a few months:

Dikes after half year – please do not touch them:

What the village got for few thousands Euros: