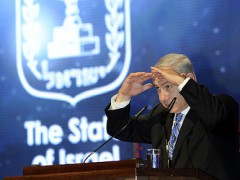 Israel’s Prime Minister Benjamin Netanyahu seen during a Conference at the ICC in jerusalem. on May 22, 2012. Photo by Yoav Ari Dudkevitch / Masa Israel Journey on Flickr (CC BY-ND 2.0)

Israeli government ministers have taken a remarkably hard-line stance on the recent interim agreement with Iran. But the deal is nowhere near as bad for Israel as Netanyahu claims, and he knows it.

The Israeli prime minister’s public opinion on the Iran deal is no secret; according to him, despite a recent “charm offensive” on the part of the Islamic Republic’s new leader, Hasan Rouhani, Iran remains a murderous, barbaric rogue state bent on Israel’s destruction, to whom capitulation is a sore mistake. His condemnation of the agreement has thus been fittingly brazen.

As Obama recently admitted, there is reason to be suspicious of Iran’s newfound friendliness. The nation’s president may have changed, but its supreme ruler, Ayatollah Ali Khomeini (by all accounts, a far-right, Islamist hawk), arguably still calls the shots, and his rhetoric remains as hard-line as ever. Furthermore, Iran’s domestic policy, despite one recent let-up, leaves little room for credibility; severe punishments of dissidents, homosexuals, and apostates remain widespread. All of this notwithstanding, it is undeniable that Iran’s foreign policy has changed very drastically, a fact that Netanyahu, on the surface at least, appears to struggle with. Or does he?

Very recently, Israel’s military came on record to say that the deal with Iran enhances regional stability. This is a tangible divergence from Netanyahu’s stance and the first indicator that his opposition to any deal may not be entirely sincere.

It must be said that any speculation on the private conversations among Israel’s leadership is just that – speculation. Nevertheless, it can be concluded beyond any reasonable doubt that the Prime Minister of Israel takes the opinion of his military intelligence very seriously; it is more than likely that he is fully briefed and aware of their position. In which case, why is his opposition to the deal so vocal?

Israel-Iran analyst Meir Javendafar, in an interview with Sky News, proposed that his statements form part of a much wider ruse. A very obvious factor in this ploy is the appeasement of the Israeli right, particularly those in Netanyahu’s cabinet. Right-wing parties in his coalition such as Yisrael Beiteinu and HaBayit HaYehudi, both extremely uncompromising in their foreign policy, will no doubt be pleased by Bibi’s rhetoric, thus helping to cement his increasingly fragile position.

The ruse, though, extends far further. Just as Iran needs the United States as its “Great Satan,” Netanyahu needs Iran as a bogeyman to divert the Israeli public’s attention from its own problems. Particularly, these include soaring inflation and property prices, growing tensions between secular and religious Jews, and a floundering peace process, which currently threatens to tear the coalition apart.

Away from domestic issues, Netanyahu’s rhetoric has its uses on the world stage. As indicated by the military’s aforementioned statement, it is generally accepted that Iran will not completely dismantle its nuclear program. Even Netanyahu knows this, as evidenced by the dispatching of an Israeli negotiating team to the United States. Such a move indicates that Netanyahu’s maximalist stance is a negotiating tactic rather than a sabotage attempt, with the aim of influencing the final agreement as opposed to preventing it.

Netanyahu is infamously stubborn, hawkish, and bull-headed, but a fool he is not. Although his immovability regarding the Iran deal appears to be shortsighted in the extreme, it is very likely that this is part of his ultimate plan, and the next six months will see it unfold. Despite my instincts regarding the man, I would hope that such a plan has the interests of both the Israeli and Iranian people in mind, paving the way toward the final conclusion of three decades of proxy conflicts, assassinations, and petty squabbles. Quixotic, perhaps, but in the bewilderingly complex world known as the Middle East, anything is possible – even peace.

I have views, and I'm arrogant enough to think that the world cares about them, so I write stuff.