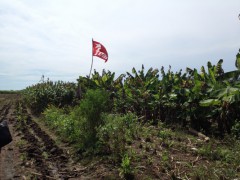 Two American cities, Los Angeles and Washington, D.C., have as many Salvadoran residents as San Salvador, the capital city of El Salvador.

These millions who have left are often in search of higher wages and better job opportunities to support themselves and family back home.

A globalized world makes this movement more likely, but also may be part of the cause.

So what happens when “globalization” means “emigration”?

A leftist political flag flies over a sugar cane field outside Cara Sucia, El Salvador. Sugar is one of El Salvador’s top exports, along with coffee and textiles. The developing nation is heavily agricultural. Photo Credit: Jamie Stark.

The Growth Side of Globalization

“In my opinion, it’s been good,” says  Ottoniel Armando Rodriguez Membreño, a manufacturing consultant in San Salvador. “Business owners are improving technology to have the capacity and to meet requirements from outside of the country.”

He referenced the 2004 CAFTA-DR, a Free Trade Agreement between El Salvador, several Latin American nations, and the United States, which allows most products to be exported to the U.S. without being taxed.

When President Obama toured Latin America in 2011, his only Central American stop was El Salvador. Analysts wrote that El Salvador was, in part, the friendliest nation toward the U.S. in the region, a foothold for the U.S.

And in many ways El Salvador’s government has taken steps to invite such connections to try to bring in foreign visitors and investment. In recent years investment in tourism has grown,  bringing more money and visitors to the country’s Pacific surf spots. Locals talk of the value of learning English to work at one of the multinational call centers in San Salvador.

El Salvador is monetarily linked to the United States. “Above all we’re dependent on the dollar,” says Rodriguez, the business consultant.

Then, “the colon disappeared,” says Mauricio Almedo, a fourth year English major at the University of El Salvador in San Salvador.

The colon was worth significantly less than the dollar. The switch cut the spending power of many average Salvadorans and helped lead to the departure of so many citizens for the United States.

Holed up in banks, the colon was removed from the system and today all price tags and currency exchange ask for American bills or coins, in practice turning El Salvador into one of the world’s dollarized nations (others including Ecuador, the Marshall Islands and of course, the United States).

“You make money at the colon level, but prices are at the dollar level,” says Almedo, the English student.

In a country using remesas, or remittances, from the U.S. as an economic crutch, with an undeveloped sphere of entrepreneurism that Rodriguez describes as “absent,” tiny El Salvador may have a ways to go to before globalization positively affects the economic autonomy of the nation and its individuals.

Many Salvadorans agree – El Salvador is locked into a relationship with the United States, dependent on remesas sent home from higher wages and the printed U.S. dollar.

With no simple solution, the best change would be more jobs and higher wages in El Salvador. That could mean less emigration, more families living together and more money generated in El Salvador, supporting its own economy.

The brain drain of emigration could slow and the promise of an independent economy could become more attainable. We have yet to see if the economic downturn in the United States has helped persuade more Salvadorans to return to or stay in El Salvador, naturally starting such a process.

Jamie Stark is traveling Central America writing for FutureChallenges as he goes. Follow his travels at twitter.com/jamiestark or on his blog, here.